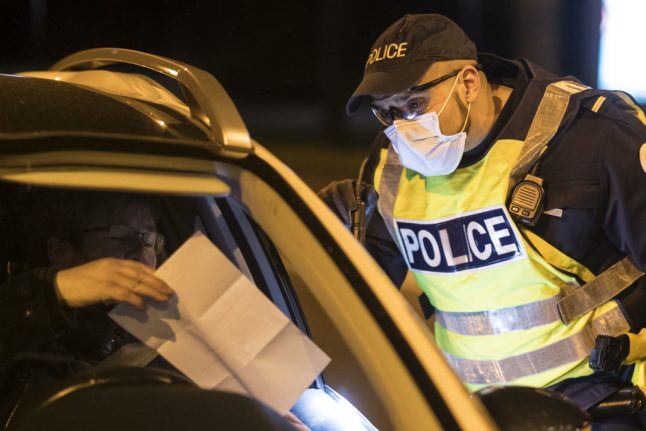 Falling foul of the rules could net you a €135 fine. Photo: AFP

France first went into lockdown on March 17th, but a week later a new decree was published tightening up the rules.

Since then numerous local authorities have introduced their own extra rules, from curfews to exercise restrictions to bans on access to certain areas.

Here's an outline of the rules.

Broadly, everyone should stay in their homes as much as possible and only venture out on essential errands.

Every time you go out, even if it's just round the corner to get a baguette, you need a signed, timed and dated permission form.

The principle of the rules is to have as few people out of their homes at any one time as possible, in order to give the virus fewer chances to spread.

But of course life essentials still need to continue and there are accepted reasons to be out of the house.

Everybody should be working from home if that is possible. Employers are obliged to organise home working and adapt their business practices if necessary.

But there are exceptions for those who have no choice but to go to the place of work if that work “can't be postponed”.

There is a special form to fill out for employees in this category, which can be found here (just below the first form, scroll down to “justificatif de déplacement professionnel”).

The form needs to be signed by your employer.

Following much confusion as to how far and for how long someone could exercise outside, the new decree has clarified and rendered more stringent the existing rules.

“Going out to take the children for a walk or for physical exercise must be within a distance of one kilometre maximum of your home, for one hour, and obviously alone, once a day,” Philippe said on Monday.

People are allowed to take individual physical exercise – such as going for a jog – or for a short walk in the company of people who live in the same house or to walk the dog is allowed.

Cycling for exercise is not allowed but it is still permitted to cycle to work or the shops.

In Paris, from April 8th, jogging will only be allowed after 7pm or before 10am.

Following reports that too many people kept non-urgent doctor's appointments during the lockdown, the second decree limited all medical visits to those that “cannot be delayed” or “done from a distance.”

Urgent medical appointments like cancer treatments or a dialysis are therefore still allowed, but other less pressing medical visits that could either be postponed or rescheduled as online appointments are not.

Pregnancy care continues and women who need an abortion can still access one.

READ ALSO What if you have a health problem other than coronavirus?

Public transport systems are still running limited services, especially in cities. New rules specify that all travellers must enter buses from other doors than the one at the front. Tickets will no longer be sold on the bus.

All public transport must comply with strict rules on hygiene and all passengers must follow rules of “social distancing” (keeping at least one metre between themselves).

Deliveries are still allowed – indeed people are encouraged to shop online where possible – but there is to be no social contact between the person delivering and the person receiving, and packages are to be left outside the front door.

No one is to sign to state that they have received a delivery.

All family visits that do not qualify as “vital” (for example providing urgent care to a child or older person) will not be allowed during the lockdown period.

Extra roadblocks were set up at the start of the Easter period to deter French people from going to visit family or second homes.

The new decree also specifically lists visits that are responding to a legal conviction by French police, justice or public administration as valid reasons for leaving one's home.

This does not include civil matters such as buying or selling houses.

While going out for grocery shopping will still be permitted, all open-air markets were banned from March 23rd.

However, in areas where markets fill an essential role, the mayor could ask to be exempt from the rule, the decree stated – providing that the markets gathered less than 100 people.

Many local authorities have been granted exemptions under this rule.

Every time you leave your home you need to fill in a form stating your errand. Each trip requires a new form.

The form can be downloaded here. It has not been updated since the beginning of the lockdown, however it's possible that it will be seeing as this one specifically refers to the decree issued on March 16th (and not the new decree).

Anyone who does not have a printer can hand write their own version, including their full name, address, date of birth, plus reasons for travel. The form must be signed and dated that day. There is also now a smartphone version available.

Formal cards or passes from the medical profession and journalists will also be accepted in lieu of a form if people are out performing professional duties.

Any violation of the rules in the decree could lead to a fine of €135.

A second breach registered in the 15 days following the first breach will be punished with a €1,500 fine.

Anyone who breaks the rules four times in 30 days risk a €3,700 fine and up to six months in prison.

The above rules are those stated in the national government decree, however many local authorities have brought in extra measures on top of the national rules.

Dozens of towns have put curfews in place, while access to beaches in certain areas is baned.

Paris has banned access to areas including the walkways along the Seine, the Bois de Vincennes and Bois de Boulogne, as well as restricting exercise during the daytime.

Check your local préfecture for any restrictions in your area.