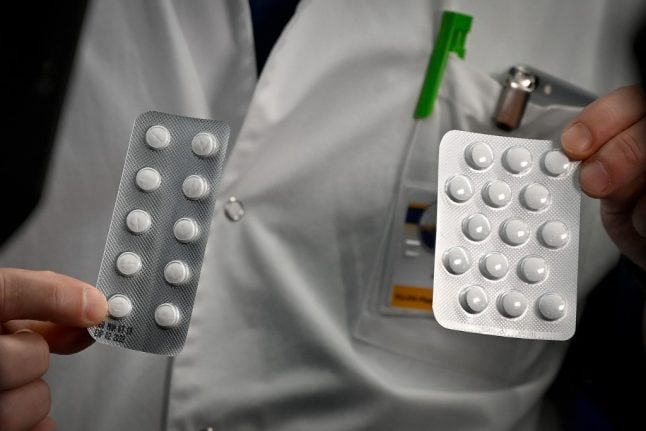 It's an existing anti-malaria drug, used both to prevent the illness and treat it, so if you've been on holiday to a country where malaria is prevalent you may have already been prescribed it.

It's known by the brand name Nivaquine or, for hydroxychloroquine, Plaquenil and is the synthetic form of quinine.

The drug has been on the market for more than 70 years and is sometimes also used to treat arthritis.

For the latest on the coronavirus situation in France, click here

And can it cure coronavirus?

Well that is the question.

Some doctors and scientists believe it can be effective in treating people who have the virus – it's not a vaccine and it doesn't seem to prevent people developing initial symptoms.

What is the evidence for its effectiveness?

The drug is now part of a comparative study on 800 hospitalised coronavirus patients in France. Some are being treated with anti-viral drugs including those used against Ebola, hepatitis C or HIV while others will be given chloroquine or hydroxychloroquine – the two constituent parts of the anti-malaria medication.

France Health Minister Olivier Véran has given permission for the drug to be used for coronavirus patients – but only for the sickest patients and under strict medical supervision in hospitals. It is not available for people to take at home.

The trial will run for six weeks.

Citing a ruling adopted after a meeting of France's high public health council, Veran said the drug could not be used to treat milder cases of the illness.

“The high council recommends not to use this treatment… with the exception of grave cases, hospitalised, on the basis of a decision taken by doctors and under strict supervision,” Veran told reporters. Why do people think chloroquine will work?

The possible treatment has been heavily promoted by Professor Didier Raoult (above) a microbiologist based in Marseille who specialises in the study of infectious diseases.

Professor Raoult reported that after treating 24 patients for six days with Plaquenil, the virus had disappeared in all but a quarter of them. The research has not yet been peer reviewed and published.

He told French media over the weekend: “I am convinced that in the end everyone will use this treatment. It's just a matter of time before people will accept it and say, this is what we have to do.”

His bullish pronouncements lead to people queuing outside the  IHU Mediterranee Infection in Marseille on Monday, desperate to get their hands on the drug. People wearing facemasks wait in front of the Institut Hospitalo-Universitaire Mediterranee Infection, in order to be screened for the COVID-19 in Marseille, southern France, on March 23, 2020. AFP

It's also been picked up by US president Donald Trump, who promoted it as a cure and said it would be fast-tracked to be available to Americans.

But it is the cure?

Let's not get ahead of ourselves. This is very early days to start talking about anything as a cure and it needs a lot more testing.

Some researchers have said chloroquine shows great promise as a treatment, though scientists have agreed that more trials are needed to determine if the drug is really effective and safe.

Professor Raoult is a respected expert in his field, but this is just the beginning of the process.

Although chloroquine itself has already been tested extensively and cleared for market use, no-one really knows what its effects will be on coronavirus, whether there will be any side effects and whether any other drugs could prove to be just as effective.

Early indications from Strasbourg hospital, which is involved in the testing, are that some of the patients in a serious condition did not deteriorate to the point where intensive care was needed.

However as the trials have gone on, several dozen patients have reported undesirable side effects, and there seems to be an associated risk of arrhythmia, which can lead to heart attacks.

“It's perfectly normal that treatments be tried, given the circumstances, but that doesn't mean we shouldn't monitor… these substances,” said Dominique Martin, head of France's drug safety agency.

In France it will only be available under strict hospital supervision and patients are warned that it should not be taken under any other conditions.

In the USA there have already been reports of several deaths of people taking a form of the drug believing it would protect them, or trying to create their own version of the drug.

And if it does work after testing?

Well that would be very good news, because it's already widely manufactured.

The French drug maker Sanofi said it would be in a position to provide millions of doses to the French government, should the clinical trials prove effective.

We will know more after the end of the six-week trial.

In the meantime, people in France are urged to keep following the current health advice – if you believe you have coronavirus and are seriously ill with difficulty breathing, call an ambulance on 15.

If you believe you have the virus but do not need an ambulance, contact your regular doctor by telephone or an online appointment.

There is also now an online coronavirus advice site in France aimed at those who think they have symptoms.

And of course, follow the lockdown rules to prevent the spread of the virus as much as possible while the medical teams do their work.