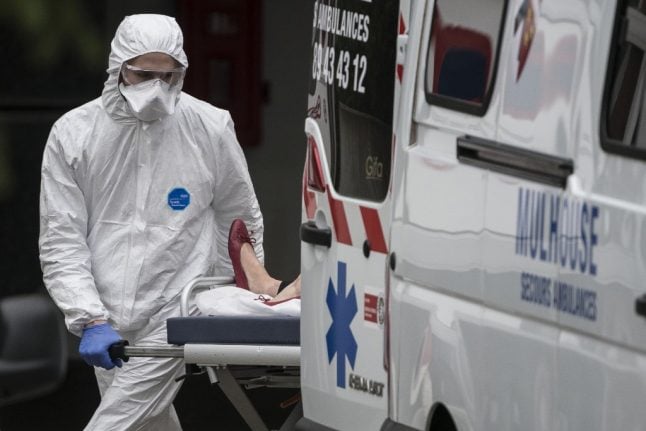 French medical services are struggling with the sheer number of cases. Photo: AFP

France's healthcare system is widely acknowledged as among the best in the world, but it is facing an unprecedented challenge as coronavirus continues to spread and the death toll rises to more than 600.

France has also seen the first death of a hospital doctor, a 68-year-old accident and emergency medic in Compiègne in the Oise département, one of the places that saw an early cluster of coronavirus cases.

So what measures are being taken to support the system? The military hospital at Mulhouse in eastern France. Photo: AFP

As the outbreak began, many hospitals declared 'plan blanc' which allows them to take emergency measures including cancelling routine procedures in order to devote more space to coronavirus cases. There are 108 hospitals in France set up to deal specifically with coronavirus cases.

Two weeks ago, French president Emmanuel Macron announced that medical students and retired doctors were being called in to help deal with the crisis. As the country went into lockdown, Macron also announced that army medical teams were being brought in to support local healthcare systems.

A military hospital has now been constructed in Mulhouse, the town in eastern France which has been among the places worst hit by the outbreak. The town was the centre of a 'cluster' of cases at the start out of the outbreak, centred on an evangelical church, and local medical services have been severely stretched by the number of cases diagnosed.

Several départements in the east of France have been particularly badly affected, and German medical services are also helping out, as doctors in Mulhouse and nearby Colmar warn that services are at breaking point. The neighbouring German state of Baden-Wuerttemberg has offered intensive care hospital beds for some patients from French hospitals. Although the virus has now been declared a 'general epidemic' in France, some regions remain much worse affected than others.

The army has also been involved in airlifting critically ill patients across the country to hospitals that are declaring with fewer cases. Several patients from Mulhouse have been moved to the southern region of Occitanie, which has fewer cases, while patients have also been taken by Navy ship off the island of Corsica to medical facilities in mainland France including Marseille hospital.

Paris hospitals over the weekend issued an appeal for people with medical training to come forward and reinforce their staff, and French rail operator SNCF said that anyone travelling for this reason can travel for free – although they will need to provide a letter from their new employer to this effect.

The greater Paris Île-de-France region currently has the highest number of confirmed cases with 5,283, although many of those are people transferred from elsewhere to the specialist hospitals in the capital.

France is not currently doing blanket testing of the population, only those who fit certain criteria, so the French health minister has warned that official figures of confirmed cases are certainly an underestimate.

France has always been clear that the general population should not be wearing masks – only people who already have the virus and medical professionals. They requisitioned all stocks of masks in order that they get to the right people, but there have still been reported shortages.

In his Friday night health briefing, health minister Olivier Véran confirmed that the government has ordered 250 million face masks and will be distributing them to medical professionals on the basis of need.

In order to limit pressure on medical services, everyone in France is asked to obey the lockdown measures and prevent the spread of the virus.

People who believe they have the virus and are very sick with difficulty breathing should call the ambulance service on 15. People who are sick but do not need an ambulance should contact their regular doctor by phone or arrange an online appointment.

If you want to show your appreciation for France's emergency workers, you can also take part in the 8pm clapping.

The 8pm clapping for emergency workers in France, tonight we have added whistles, cheers and kitchenware-based percussion from the kids next door ❤❤ pic.twitter.com/9ZhZA118yq