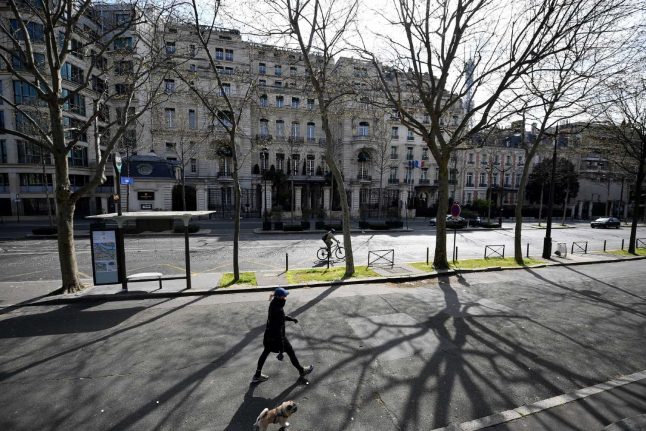 The rise in the death toll was identical to that of the previous day when it also rose by 112.

“The virus kills and it is continuing to kill,” said top French health chief Jerome Salomon as he announced the new numbers at a daily briefing.

“We are evolving quickly towards a generalised epidemic in the country,” Salomon said as he urged the public to “strictly respect the confinement rules.”

“It continues to spread and become more serious,” he said.

Wash your hands and always stay a metre from people, Salomon said.

What's the latest information on the coronavirus epidemic in France?

He said that a total of 16,018 cases of infection had been recorded in France, while warning this was an “underestimate” as not all of those with the virus had been tested, even though 4,000 tests were now being done every day.

A total of 7,240 people have been hospitalised after falling ill with the virus, he added. Of those hospitalised, 1,746 are in intensive care.

France has been in lockdown since Tuesday, with only essential trips outside allowed, but Salomon urged the French to show “patience” before the daily figures showed the effect of the measures.

35 percent of the cases are people under the age of 65.

Of those who have been confirmed to have the virus, 2,200 people have recovered completely.

It was also revealed on Sunday that French police had handed out over 90,000 fines to those who had not respected the rules of confinement.

On Sunday France's two-chamber parliament adopted a bill declaring a health emergency in the country to counter the spread of the coronavirus, a move that gives the government greater powers to fight the spread of the disease.

The text was agreed by the upper house Senate and was later in the evening expected to pass its final legislative hurdle by being adopted by the lower house National Assembly dominated by President Emmanuel Macron's ruling party.

The law also allows the government to take measures to support companies and also backs up its decision to delay to second round of municipal elections, saying these should take place in June at the latest.

France has from Tuesday been in a nationwide lockdown, with only essential trips outside the house allowed, to battle the coronavirus that has already killed hundreds and infected thousands more in the country.

The adoption of the text by the Senate, which is controlled by the opposition, was held up by wrangling between the two chambers with the right-wing parties fearing the risk of infringements on civil liberties.

“We are not in agreement on all the points,” said the leader of the opposition Republicans in the Senate, Bruno Retailleau. “But we are voting for it as we don't want to hold up the action of the government.”

In the Senate, the bill was passed by a show of hands.

The text, based on legislation agreed after 2015 terror attacks in France, declares a “state of health emergency” along the lines of a state of emergency declared during a threat to national security.

The emergency lasts for two months from the day of its adoption, although it can be extended by lawmakers.

Only a handful of lawmakers were physically present to pass the legislation with most voting by proxy, in line with the social distancing rules currently in force to fight the coronavirus.