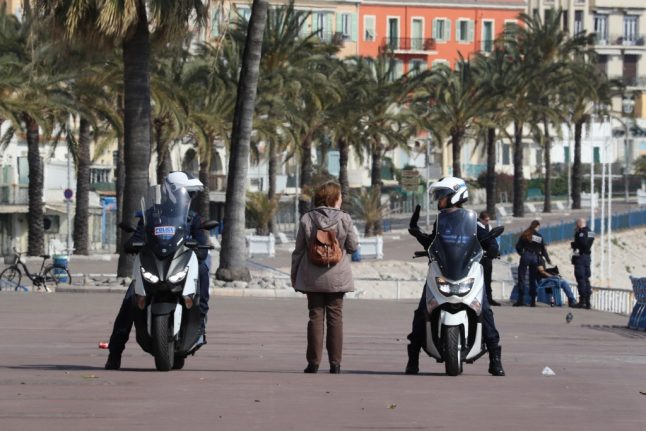 Police verify the coronavirus lockdown form of woman walking on the Promenade des Anglais in Nice on March 20th, which would be closed off to the public later that day. Photo: AFP

In an effort to stem the rapid spread of the coronavirus epidemic in the country, the French government has banned all non-essential commercial activities and issued strict rules on all outside activity in all of France.

Except for grocery shopping, going to work (for those who have to), to the pharmacy or doing some brief exercise, people are to stay in their own respective homes for at least 15 days – a period that will likely be extended.

“By staying at home, you are saving lives,” France's interior minister Christophe Castaner said. He reiterated the government's message that everyone must carry their part of the effort to limit spread of the coronavirus, to ease the pressure on the country's overstretched health system. The best thing you could to to serve your country, the government said, was sit on your couch and wait it out.

Outside, the visual impact of the ban was swift and impressive. Barely a week ago, the Paris' cafés, bars and restaurants still gathered crowds of people. Now, the French capital looks like an empty, ghost-like version of its former self.

In Ivry-sur-Seine, a suburb southeast of Paris usually buzzing with people, the streets were nearly empty on Friday morning. Only a few joggers could be spotted running around the small local park. Around, not inside. The park, like all Parisian parks, had been closed to the public.

“La peche?” (feeling good?) one jogger shouted to another who was working out on one of the benches outside the park entry.

Physical activity was still allowed in France, although restricted to a practice close to home.

The two men exchanged a few words, but kept their required one metre distance.

A long line of people queued up outside the usually overcrowded local Carrefour supermarket, carefully keeping their distance as they waited to be let in one handful at the time.

It was a scene repeated across France. Some supermarkets are handing out plastic gloves to shoppers while many staff now wear masks. This fastidiously following of the rules represented a drastic attitude shift from what France had seen just a week earlier. French President Emmanuel Macron announced the lockdown the day after people in several parts of the country had defied the government's call on everyone to stop all socialising outside, by crowding in parks and taking in the sun on the Paris riverbanks.

On Friday, four days into the lockdown, the government's mantra restez chez vous – ‘stay in your homes’ – seemed to be echoed wherever you looked.

French news channel France Info had adopted the hashtag #Restez à la maison – stay at home – as a permanent feature on their live show. Social media users posted memes, videos and pictures under the hashtag #restezchezvous to motivate others to stay put in their house.

“The quicker everyone respects the rules, the quicker we will get back our bars, our restaurants, our going outs,” on person tweeted;

But what were really the rules?

In the few days following the lockdown, there was much confusion as to how exactly the rules were supposed to be maintained. One thing was clear: if you left your home, you had to bring the mandatary form stating where you were going. But some of the categories were vague. Did 'physical exercise' mean you could bike or not? How far were runners allowed to run? If you lived together were you allowed to do groceries together, or dit one person have to go alone?

No one, it seemed, had the same answers and there were reports of police officers following different rules in different areas.

“We went to Lidl, set off home and got stopped by police who were satisfied with our form,” Lesley wrote to us.

“Then, around the corner, we were stopped by a sour faced policeman who told us there should only be one person in the car.”

“But there was lots of cars around with two people in!”

As the days passed, the rules became clearer – and slightly stricter. In some cities, like Nice, mayors have imposed evening curfews, and closed off parts of the city that still gathered crowds of people. No one was allowed to run on the Promenade des Anglais anymore. Nice has closed off its promenade after too many eager runners and walkers used it at the same time. Photo: AFP

“Restez chez vous,” it seemed, meant that everyone – not just everyone else – had to stay at home.

“Lockdown with children, rule number 1,” one Twitter user wrote to the video under.

Louise, a French journalist in her early 20s, said she was “definitely” talking more to friends online during the coronavirus lockdown than earlier – even people she usually didn't talk to on a regular basis.

“Everyone is checking in on each other now,” she said.

Louise had jumped on a train to Lyon from Paris on the last day before the lockdown started, escaping the capital last minute together with many other other Parisians.

It was not a very popular move, with some accusing Parisians of nonchalantly dragging the virus do the countryside.

“Coronavirus, the fear of lockdown is pushing Parisians to exodus. The bobos (bourgeois) are leaving to contaminate the countryside.. Stay at home, good grief!”

“The fear of contaminating my family made me hesitate a lot before going,” she said, adding that, before it started, the concept of lockdown had made her very stressed.

“The idea of not being able to leave my house made me very anxious,” she said.

To Louise, the idea of spending the lockdown together with her parents and sisters in their home outside the city of Lyon seemed far more appealing than being alone in her apartment in Paris.

“I'm spending as much of my day outside as possible, which really helps,” she said.

“Here I am lucky to have a garden and terrasse. That really helps.”

'I feel like  I’m drowning in a tsunami of memes'

But not everyone had found solace in the sudden upsurge of virtual socialisation.

“I went off social media even though everyone is saying this is the most important time to be socially connected,” said Ariana, an American freelancer in her mid 20s.

“I feel like I’m drowning in a tsunami of memes,” she said.

Ariana was currently staying alone in a friend’s studio in a southern suburb of Paris.

“My friends and family have my phone number and email, so we're still in touch.”

“I just think constantly taking in this content could actually induce more anxiety. It’s too much, and there’s so much disinformation out there, that I prefer to just read the news.”