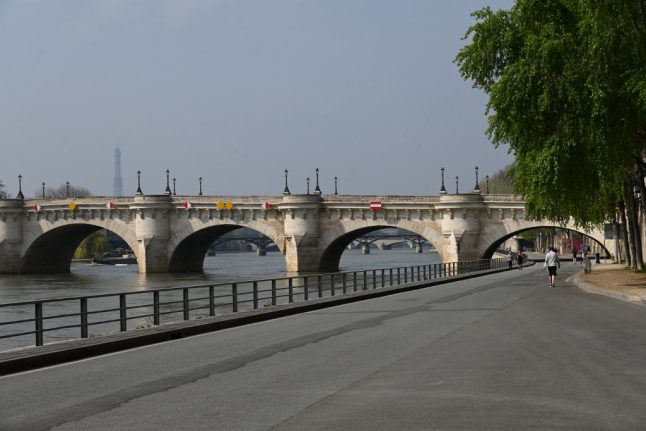 The walkways along the Seine are now out of bounds. Photo: AFP

France is under lockdown with everyone ordered to stay home and trips out permitted for essential activities only.

People are permitted to leave their homes for;

But amid widespread frustration at a minority of people flouting the rules, some local authorities have introduced stricter controls. In Paris the police chief has announced a total ban on movement in certain parts of the city.

Préfet de Police Didier Lallement announced on Friday that he and mayor Anne Hidalgo had decided to bring in a ban on gatherings in some areas and a total movement ban in others.

It comes as some in Paris were caught flouting the lockdown restrictions by strolling and chatting in the pleasant spring sunshine.

From now on the pathways along the banks of the Seine, the Esplanade des Invalides and the Champ-de-Mars are out of bounds with no travel or gatherings permitted on them.

The Esplanade des Invalides is completely banned, while in other areas local residents and delivery staff will be permitted to travel for essential reasons, but they will need to provide proof.

Lallement said: “Even though most city inhabitants scrupulously respect the strict confinement instructions, it must be noted that despite the repeated calls for civic-mindedness issued by the State and City authorities and the numerous controls carried out by the police, too much careless and even irresponsible behaviour is still to be deplored.”

The mayor of Nice, Christian Estrosi, also told LCI radio that he is considering imposing a 9pm curfew, with essential workers the only people allowed out in the evening.
He has already closed the famous Promenade des Anglais seafront promenade.
The southern city of Perignan has also imposed a curfew from 8pm to 6am. Is Nice headed for a curfew? Photo: AFP
In recent days the government has also banned all forms of hunting.
Initially only group hunting was banned but to the delight of animal welfare associations the government clarified the rules with all forms individual hunting also banned.

On Friday authorities in Dordogne released a statement reminding people that outdoor activities like hunting and fishing also come under the ban on leaving home for non-essential activity.

The statement reminded people that “outdoor activities are not among the reasons allowed for leaving your home” and added that hunting, trapping, non-professional fishing and sailing were all banned under the terms of the national lockdown.

The three regional authorities which cover France's south coast – Corsica, Provence-Alpes-Côtes d'Azur and Occitanie – have already banned all access to beaches in the south after people were observed meeting up on the beaches for social gatherings.

On Thursday, authorities closed beaches and hiking trails along the Atlantic coast in the Morbihan region of Brittany.

Officials in Morbihan also banned all accommodation rentals on four islands, including the popular
Belle-Ile.

“The habitation of furnished lodgings that are not primary residences is restricted to the owner, and in their presence, their children and parents,” according to a government decree.

Local officials in Normandy have also banned people from walking, jogging and cycling on coastal paths.

The government has also been reminding the public living near the coast that all forms of water sports are forbidden at this time. Here the ministry of sport retweet instructions from authorities in Brittany reminding the public that activities such as kite surfing and sailboating were banned.

The entire Mediterranean coast was also declared off-bounds because “We are seeing too many people on the beaches”, regional prefect Pierre Dartout told AFP.

With most museums and landmarks already closed, the Sacre-Coeur basilica overlooking the capital was shuttered for the first time Thursday since it was built in 1914.

Prison visits have been suspended and the Cannes film festival postponed.