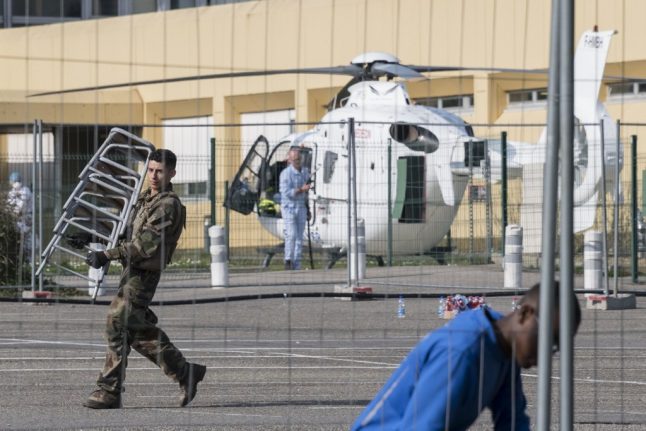 French soldiers instal a military field hospital outside The Emile Muller Hospital in Mulhouse, a COVID-19 infection hotspot in the east of France, on March 20, 2020. Photo: AFP

“Don't go away this weekend, stay at home,” said Director General of Health Jérôme Salomon on Friday evening, as he confirmed that 78 more people had died in the last 24 hours.

Of the total 450 deaths, 87 percent were aged more than 70, according to Salomon.

He explained that the positive effects of the lockdown were not immediate and that the virus was still spreading quickly all over the country.

“We expect a peak of at between five-eight days, but it will be between 10-22 days before we see how effective the changes in behaviour have been,” he said.

It was “possible” that the government would extend the lockdown period, according to Salomon.

The total number of people having tested positive for the coronavirus had passed 12,600 people on Friday, although France has limited their testing to people who fall into certain groups.

Over 5,200 people were currently hospitalised, 1,297 of which were in intensive care. Half of these were under 60 years old.

On a more positive note, the number fully recovered people had increased to 1,587.
The recovery rate of the coronavirus in France is about 98 percent.
Salomon said people should keep to their current area and avoid potentially putting more pressure on hospitals in rural areas that might lack the necessary equipment to “handle seriously ill people.”

The announcement came the same day as France's interior minister Christophe Castaner warned that application lockdown rules would be “reinforced,” with police controls in “all train stations and airports.”

Castaner also repeated that the lockdown period would “likely” be prolonged, like government spokesperson Sibeth Ndaye had also said earlier that same day.