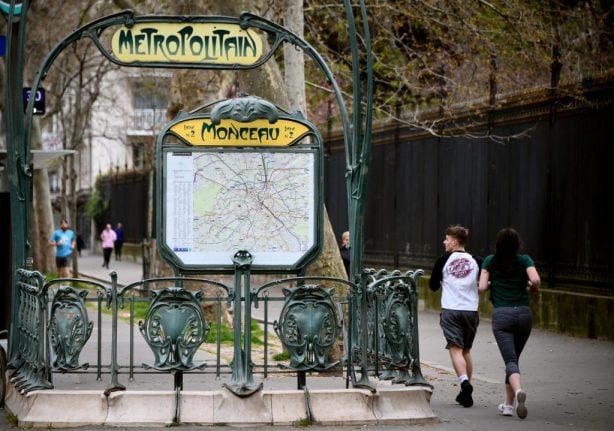 Taking exercise is one of the official reasons that people are allowed out of their homes during the lockdown – along with trips to buy food, medical appointments, urgent family reasons and trips to and from work for people whose work is essential and cannot be done from home.

At the outset of the lockdown, the only restriction on exercise was that it must be taken alone and that anyone leaving their house for a quick sweat had to bring the mandatory form with them in case of a control.

Following much confusion as to how far and for how long someone could exercise outside without risking trouble with the gendarmes, French Prime Minister Edouard Philippe clarified the rules on Monday evening.

“Going out to take the children for a walk or for physical exercise must be within a distance of one kilometre maximum of your home, for one hour, and obviously alone, once a day,” Philippe said.

From now on, the PM said, anyone leaving their house for physical exercise were required to write down the time they left.

“We must not joke around with security rules,” Philippe said.

The new rules would be applied starting Tuesday, March 24th. Joggers run alongside the Monceau Park in Paris, on March 22, 2020, on the sixth day of the lockdown. Photo: AFP

Since the beginning of the lockdown there has been widespread criticism of the high number of people all over France taking to the streets to jog after the new rules entered into force.

One kilometre, on hour, once a day provided much-needed clarification of a problem that had seen the sports ministry and interior ministry respectively issuing different guidelines.

Last week, the sports ministry said physical exercise must be limited to an area of one or two kilometres from home.

“1km or 2km max.. You're not supposed to distance yourself from your house,” the ministry tweeted.

“The rule is for everyone to be confined. Remember that you are not supposed to leave except for urgent matters such as grocery shopping or health reasons. A short run is possible, but not a 10k!”

After some people complained that the enforcing of the rules had been inconsistent, having been told that they were too far while staying within the 2 km rule, the ministry responded:

“You're right, it's complicated. We need a general rule while remembering that the situation is not the same in Paris as in Aveyron. The rule is: stay in your home as much as possible. If you go out, do so briefly and close to your home.”

The ministry of interior on the other hand opened up for the police forces on the ground to interpret the government's guidelines depending on the needs in their local area.

In an interview with the French daily Libération, the interior ministry said “the sports ministry's tweet is a recommendation of distance” and that “it is up to police officers to verify that the rule is being respected.”

Some cities have completely closed off parts of their territory for exercise, like the Seine riverbanks in Paris and the Promenade des Anglais in Nice.

There was also a lot of confusion around whether cycling is banned or not after the French cyclist federation said on Thursday morning, as cycling “does not comply with the criteria” specified in the government's decree.

“We ask all cyclists to be responsible and avoid all outdoor activity during this period,” the federation tweeted.

“One watchword matters: “Save lives! Stay at home!'.'

The government then appeared to back up this message by retweeting the federation with the words: “We have one message for cyclists: 'stay home'. “

But when the ministry of interior was asked to confirm cycling was banned their response to Liberation newspaper was slightly different.

The ministry said it was permitted if it was “necessary for good personal balance” adding that that it is all about “reducing your trips outside to the maximum”.

The interpretation of the rules by police on the ground may also not be consistent.

One French journalist reported taking his bike out to get some exercise and the police who stopped him to ask for his form accepted that it was allowed as long as he was alone.

Cycling to work is NOT forbidden however although you will need to have your “attestation” with you to show to police.

READ ALSO What are the rules during France's lockdown? Runners on the banks of the Garonne river in Bordeaux, southwestern France, on the third day of the lockdown in France. Photo: AFP

The French government has recommended everyone to be active for at least 30 minutes a day (an hour for children) during the period of lockdown.

“Move your body, walk, dance, but respect the health advice we have given,”

Everyone in France have been told to stay home as much as possible, only going out for essential errands outlined on the mandatory form that anyone leaving their house must carry on them.

If you're having trouble finding motivation to exercise during lockdown, here are five apps that make it easier for you to strengthen your body and brain without leaving your home.

The number of deaths linked to coronavirus in France rose to 860 on Monday after another 186 fatalities were recorded in 24 hours.

Of the 8,675 patients being treated in hospital for coronavirus, some 2,000 were in a serious condition, according to the French health minister Olivier Véran. That represented an increase of 300 people in 24 hours. A man running in front of the Louvre as the lockdown came into effect in France. Photo: AFP

Since the coronavirus lockdown entered into effect, the government has repeatedly stressed that the restrictions on movement were not made so that people should find ways to go around them, but were put in place for everyone's safety.

France's Interior Minister Christophe Castaner urged everyone to respect the health authorities' call on everyone to stay inside their homes as much as possible, as he clarified why it was now mandatory to have this form on paper and not on smartphones, which had initially been allowed.

“We will keep using the paper version of the form because it's safer (..) and also because it's more restrictive,” Castaner said, adding that the new measures were “not put in place to facilitate the life of the French who want to go outside as freely as possible.”