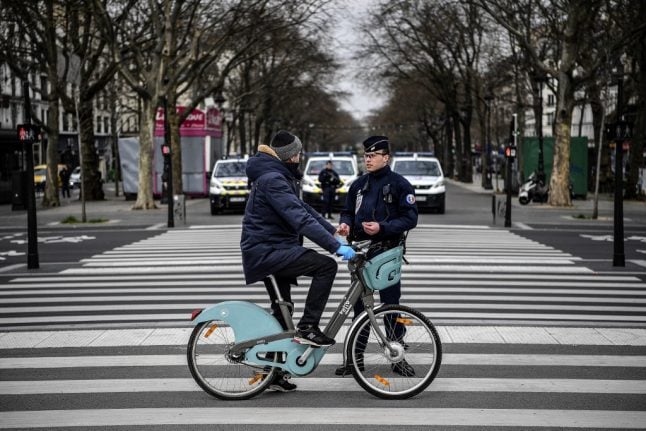 “Since this morning, we have begun procedures and 4,095 people were booked (for violating the rules),” Interior Minister Christophe Castaner told TF1 television.

From midday on Tuesday, people in France have been unable to go outside except on essential trips, for which they must sign a document stating where they are going.

Plain clothes cops fan out along my street in Paris stopping everyone to check if they have the required document to go out. #COVID19 #coronavirus pic.twitter.com/ATNzeZiDOm

“Our aim to is to protect the French. The best way to protect lives is to stay at home,” he said.

Asked about the fact the many French across the country were still taking walks and even jogging, Castaner said this was permitted so long as people went outside alone.

Announcing the lockdown on Monday, President Emmanuel Macron said exercise was permitted, in contrast to the even tighter regimes in Italy and Spain. “This is discipline and a civic mentality. If needed we will be rigorous and will sanction people,” he warned.

The Breitling watch worth several thousand euros was among several items recovered from a suspected thief who was arrested during the fiasco that marred the match between Liverpool and Real Madrid.

After the game, supporters were preyed on by robbers as they made their way to local transport connections, with many reporting pickpocketing, muggings and threats.

“In one operation on the night of the final, several objects that clearly had been stolen were seized. Investigators were able to identify the owner of a luxury watch,” prosecutor Eric Mathais in the Paris suburb of Bobigny said on Twitter.

“Contact was established with him and, during a visit to France, he was able to recover his watch at the Bobigny courthouse on Tuesday,” he said.

Around 240 complaints have been filed with police over the violence, which sparked concerns over the French authorities’ ability to ensure security at two major upcoming events, the Rugby World Cup next year and the 2024 Paris Olympics.

“I’m hopeful that some of the perpetrators of these aggravated robberies will be identified and judged,” Mathais said.

An enquiry by the French Senate into the mayhem concluded last month that organisers were to blame, not supporters, undermining claims by the police and Interior Minister Gérald Darmanin.

Paris police chief Didier Lallememt has since been replaced.