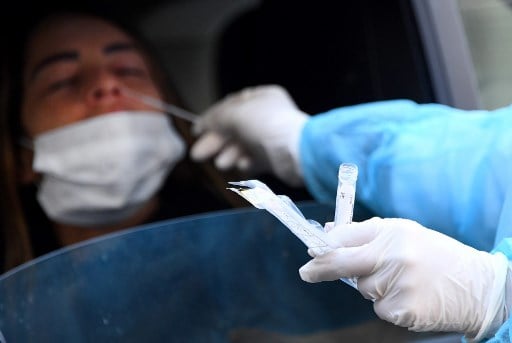 France aims to test 20,000 people a day starting from this week.. Photo: AFP

Health minister Olivier Véran has promised two million coronavirus tests in France in April after criticism that the country's testing process was too narrow.

The World Health Organisation's advice to all countries is 'test, test, test' but France has until now only been testing certain groups of patients.

Find out the latest on the situation in France here This is why recorded death rates from each country should be treated with caution – every country has a different policy of both testing and recording cases.

READ ALSO Why does France's death rate differ so much to other countries?

So what is the situation in France with testing?

France has had two distinct phases to its testing – in the early stages of the outbreak, when all cases were linked to foreign travel, France operated a policy of targeted testing on anyone who had travelled to an outbreak zone and anyone who had contact with a known case in France.

But once the virus moved to the stage of being transmitted on French soil, contact testing was no longer useful.

France then moved to testing What has changed in France?

In addition to the extra testing capacity, the health minister has also authorised a wider range of laboratories to perform the tests, in order that results are delivered as quickly as possible.

The recommendation is that through the month France will eventually move to testing all suspected coronavirus patients.

However it is still only possible to get a test with a prescription – there are no drive-through testing centres of the type seen in South Korea.

Testing is expected to gradually increase throughout the month, but still concentrated on those with serious symptoms.

France has said that its testing model is focused on providing healthcare for the sickest and most at-risk patients.

However when lockdown measures are loosened up, mass testing will become more important in order to ensure that people with either mild or no symptoms are not spreading the virus as the population begins to move more widely again.

The French government's eventual target for this is testing 100,000 people a day – but that target is currently set for the end of June.

Anyone who thinks they have the virus and is seriously ill should call the French ambulance number – 15 – tell the operator it is a suspected case of coronavirus and follow the instructions given.

Anyone who believes they have the virus but does not need an ambulance should call their usual doctor or set up an online appointment.

For anyone with questions about the coronavirus who is not in need of urgent medical help, there is a freephone advice number – 0800 130 000 – that they can call.

If you have been diagnosed, or think you have the virus, you should self isolate for 14 days.