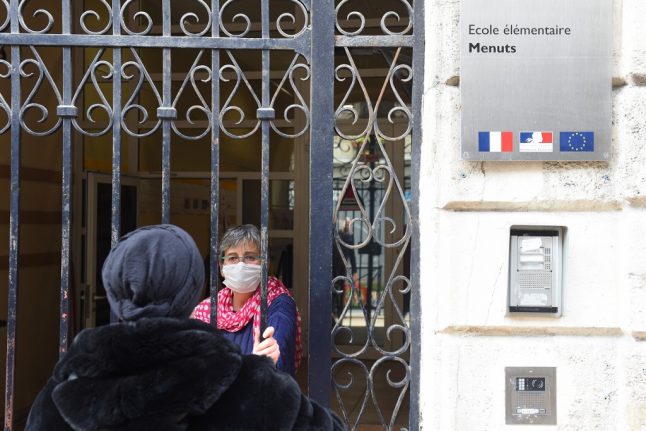 For the next 15 days everyone must stay at home, trips outside the home are only permitted for specific essential activities.

Anyone outside their home will need a form stating their reasons for being out and must stay 1 metre apart from other people. In the final hours before the lockdown began, people did last-minute shopping, with long queues outside many stores (although food shopping will still be permitted as an essential activity).

There's a rush on supermarkets this morning in Paris as people try to squeeze in a last shop ahead of the noon deadline, with people in the queue leaving space between each other. Some older people are wearing face masks (where on earth did they get them?) #COVID19france

Many stores were so busy they were restricting entry and panic-buying seems to have belatedly arrived in France as aisles including pasta, rice, eggs and tinned tomatoes were stripped bare.

The biggest queue I've seen so far is this one, for the largest supermarket in the area. It winds from the entrance to half way down an adjacent side street. #COVID19france pic.twitter.com/fSaDNphdhi

My local boulangerie, and note the distancing between people in the queue. Then the queue outside the pharmacy! #Rambouillet #CoronavirusFrance pic.twitter.com/8ByurcEvBe

This video of a store in the northern Paris suburbs is making the rounds. Keep in mind this is a poor neighborhood where many probably weren't able to take off time – and get paid – and go shopping earlier.

It only shows how difficult life is for many with less money. https://t.co/rlDVHrQdW7

Meanwhile many people used the time to get to the place they wanted to wait out the lockdown – particularly in Paris which saw a scramble to leave the capital.

“It's very impressive, it's barely 6.30am and people are running to the trains,” a French reporter said in the clip below from Paris' Montparnasse station.

“They are saying that they want to leave Paris to stay with family or friends in the countryside,” she said, adding that “most of them had started thinking about leaving at the end of it last week.”

Another French journalist also described scenes of what he called “people fleeing Paris” in the Montparnasse train station on Tuesday morning.

“Many young people are going to see their family for the lockdown,” he wrote.

“Many people are carrying big suitcases, a sign that they're not planning on a quick return to the capital.”

Not everyone was happy about what the French newspaper Le Figaro described “an exodus of Parisians” on Tuesday morning.

“Parisians fleeing Paris.. are accelerating the geographic spread of the virus,” this Twitter user said, adding “is this stupidity? Individualism?”

The lockdown had been widely rumoured for some days, with many people heading to the seaside, countryside or the parks over the weekend to enjoy the beautiful weather, conscious that it may be their last trip out for some time.

The lockdown measures are initially in place for 15 days, although this could be extended if the situation changes.

READ ALSO What's the latest on travelling to and from France?