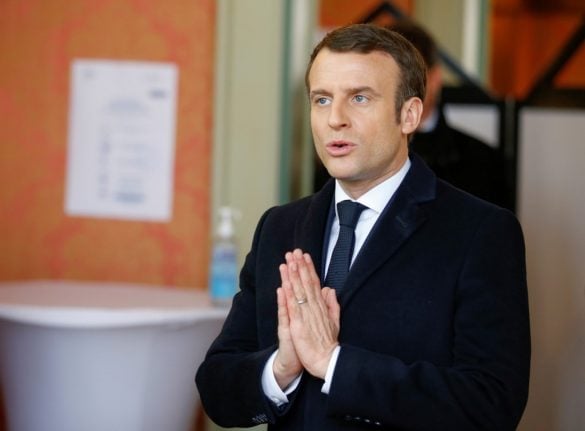 President Emmanuel Macron on Monday ordered people to stay at home from midday Tuesday except for necessary reasons such as shopping, saying any violations of the stricter rules to battle the coronavirus would be punished.

In a 20-minute address to the nation, he said the French had to “severely restrict movements for the next 15 days at least” and limit social contacts as much as possible. Any violation of this new regime would be “punished,” he said.

Macron, who repeatedly said France was “at war” with the virus, also announced that the second round of local elections due to be held on March 22 would be postponed.

“We are at war. A health war, certainly, but a war,” the French president said.

“You will be able to go to get medical help, to go to work if you have to, and to do a physical activity, but you will not be able to meet up with friends in the street,” the President said.

“You will not be able to shake hands, and you will have to keep one metre between yourselves.”

Later in the evening Macron's Interior Minister Christophe Castaner added some details to the new rules saying anyone found to be flouting them would be fined 38 euros.

Anyone outside will need to present a certificate, available to download from the government's website tonight, stating their reason for being out (although a hand written version could be accepted for those people who do not have printers).

Castaner added that people would be allowed out to walk their dogs, but not a group.

In a raft of announcements the presidents said all taxis and hotels would be put at the disposal of the health service.

The government would also deliver protective masks to the “25 most affected regions starting tomorrow,” Macron said.

In Alsace, one of the areas the hardest hit by the virus, the government would establish a military hospital with the army helping under-pressure hospitals in a region of France with a rising number of cases.

“Everyone needs to get together on one single objective: slow down the spread of the epidemic,” the president said.

“Listen to the health personnel who are saying ‘if you want to help us, stay at home’,” he said.

He also urged people “not to cede to panic or disorder”.

France's national health agency Santé Publique France reported that the coronavirus death toll had risen to 148 on Monday, with over 6,600 confirmed cases of the virus.

“Until now, COVID-19 was perhaps something distant,” said the president.

“Now it has turned into something immediate, something real,” Macron said, referring government's ramping up of restrictive measures this weekend, ordering all bars, restaurants and other “non-essential commercial activity” to shut down.

“We have seen people not respecting the government’s advice, continuing to go to parks and bars,” Macron said.

Despite French health authorities urging people to stay home as much as possible, many Parisians were out and about on Sunday to enjoy the sunny weather.

“To all of you who didn't follow the advice, you are not only not protecting yourself, you are also not protecting others,” Macron said, urging everyone to 'act responsibly' to lighten the strain on the already overstretched health system.

“If you aren’t experiencing serious symptoms, don’t go to the hospital, don’t call your doctor,” he said.

Macron announced that the second round of local elections due to be held on March 22 would be postponed.

“France has never had to make such decisions,” Macron said.

“They were taken with one goal: to protect us.”

The government would also guarantee €300 billion for bank loans to businesses in need for financial support, the president said.

A “solidarity fund” would be set up to ensure that “no one is left facing serious financial hardship.”

The EU had agreed to shut its external borders for the next 30 days, but – for now – people would still be able to travel between the UK and France.

“The more we act together the quicker we will overcome this.”

“I am asking you not to panic. We will win.”