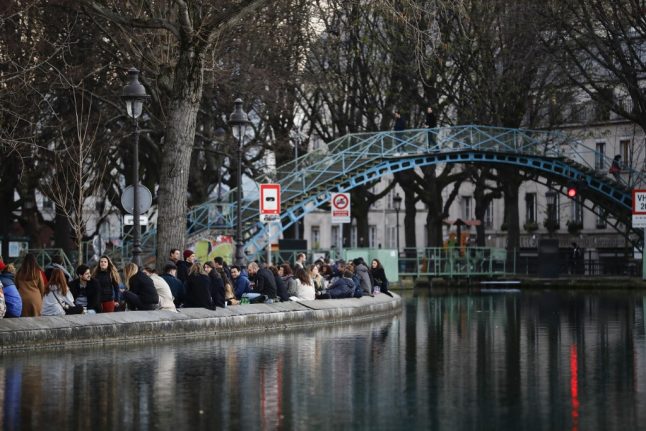 Parisians were enjoying the mild weather on Sunday, despite the government having asked everyone to limit their social interactions as much as possible. Photo: AFP

National health agency Santé Publique France, which has been updating its tally daily, put the new toll at 127 deaths on Sunday, as the government announced more stringent measures to stem the spread of the epidemic in the country.

More than 5,400 people have so far been confirmed contaminated by the virus.

“We will continue to mobilise to counter this health crisis,” Prime Minister Edouard Philippe said on Sunday evening.

The PM said the government would organise new meetings with both the scientific council working specifically with the crisis and the opposition next week to “ensure complete transparency” on their dealings with the crisis. Voters were instructed to keep a metre between themselves as they waited to cast their polls on Sunday. Photo: AFP

Sunday's local elections went ahead as planned, although voter turnout – despite the government's reassurances that polling stations would take all the necessary precautions to ensure the safety of voters.

“The high abstention rate shows that people are very worried,” the PM said.

Voter abstention was looking to be record high, at 56 percent at 8pm according to the French polling institute Elabe, against 36,45 percent in the last elections in 2014.

France ratcheted up its coronavirus regulations this weekend, ordering the closing of cafes, restaurants, schools and universities – all “non-essential commercial activity” – and limiting long-distance travel “to the strictly necessary.”

“We have observed that the first measures we have taken have not been correctly applied,” Philippe said on Saturday. “The best way to slow the virus is social distancing.”

French health authorities have stressed that 98 percent of people contaminated by the virus recover, but that it was essential to slow the acceleration of the epidemic by adopting measures of social distancing.

Only food stores, pharmacies (drug stores), banks and petrol stations were exempt from the ban and would be able to stay open in the coming weeks.

Bars, hotels and restaurants would still be able to maintain a minimum level of activity to make home deliveries, but they would not be able to receive customers on site.