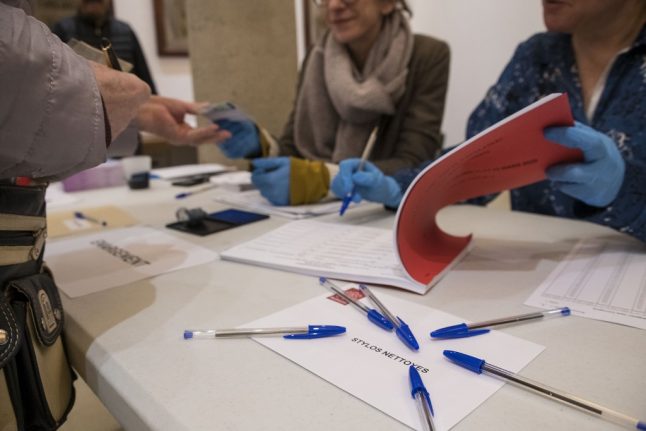 President Emmanuel Macron, for whom the two-round election is a crucial mid-term test, has insisted the polls to choose mayors and municipal councils go ahead to assure democratic continuity in the country.

“One must vote,” Bernard Gallis, 66, told AFP upon leaving an otherwise empty polling station in Aulnay-Sous-Bois outside Paris.

“There is no one here, and the risk is low,” he said gesturing towards the balloting station where his wife and six officials seated at tables laden with political party pamphlets were the only other people.

Despite fresh restrictions announced Saturday evening — including the closure of non-essential public places such as cafes, restaurants, cinemas and gyms — polling stations across the country opened at 8:00 am (0700 GMT).

Officials have insisted that voting will take place under the tightest sanitary conditions, despite widespread fear that polling stations are ideal germ-spreading venues and a particular risk for older people.

The French are voting in local elections today. And despite all the closures and advice on staying isolated the polling stations are open and people are voting… They have been asked to bring their own pens… pic.twitter.com/taQe9f0nyY

Macron said on Thursday that scientists had assured him “there is nothing to prevent the French, even the most vulnerable, from going to the ballot box”, provided everyone observes basic infection-prevention rules.

Municipalities have announced various measures to try to keep voters infection-free, including regular disinfection of voting booths, ensuring a safe distance between voters waiting in line, and providing sanitising hand gels on entry and exit.

Polling stations will remain open until 1700 GMT, 1800 GMT and 1900 GMT respectively, depending on the municipality, and a second round is scheduled to be held on March 22.

Observers say many are bound to shun the democratic exercise for fear of contamination with the virus, that has killed dozens and infected thousands more in France alone.

A recent opinion poll said 28 percent of potential voters in France were “concerned” about the risk posed by mingling at polling stations, often hosted by schools.

“It is important at this time, following the advice of scientists as we have done, to ensure the continuity of our democratic life and that of our institutions,” Macron said.

Some 47.7 million people are registered to vote in some 35,000 municipalities in a country where mayors and local councillors enjoy high popularity compared to other levels of government.

The election will be a key test for Macron, whose party swept Paris in the 2017 presidential election, but has since lost popularity in part due to its leader's perceived autocratic leadership style and lack of common touch.

The French capital will be the main battleground, with incumbent socialist mayor Anne Hidalgo challenged by right-wing heavyweight Rachida Dati and Macron's candidate Agnes Buzyn — who was parachuted in after his chosen hopeful, Benjamin Griveaux, pulled out over a sex-tape scandal.

'Many will be dissuaded'

Many in France have questioned the wisdom of holding the vote even as the country indefinitely closed all creches, schools and universities, banned gatherings of more than 100 people, and urged residents to limit their movements.

Britain on Friday postponed its own May local elections for a year citing the coronavirus. But French Interior Minister Christophe Castaner defended his government's decision, saying there were about 1,000 voters to every French polling station on average.

And even if the participation rate is 60 percent — which is high — that would mean 600 people spread over 10 to 12 hours depending on the district.

The risk from voting for the elderly was no greater “than going shopping”, insisted Jean-Francois Delfraissy, chairman of France's coronavirus science council.

“It is certain that many people will be dissuaded from voting,” political historian Jean Garrigues of the University of Orleans told AFP.

Polls showed that young people — who are not at high risk of dying from COVID-19 — are most likely to hold it up as a reason not to vote.

Even if this is just a pretext for the politically apathetic, it could impact parties that young people are more likely to support — the Greens and the far-left France Unbowed, said Garrigues.

Older people, even though they are more motivated to vote, may end up staying away out of fear, thus robbing parties such as the right-wing Republicans or Macron's centre-right Republic on the Move (LREM) of votes.

This means that the political repercussions of high voter abstention among the young and the old could cancel each other out, said Garrigues.