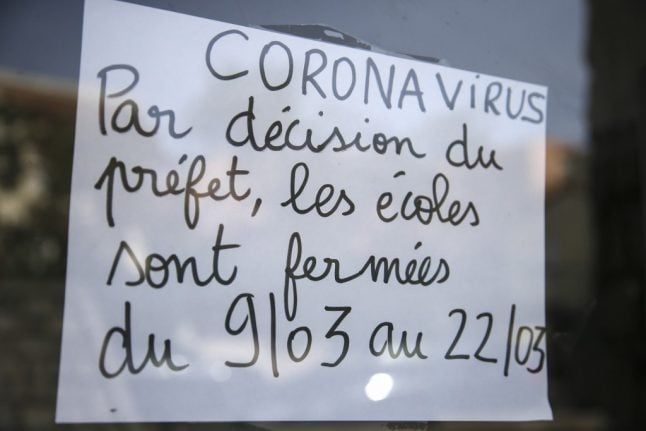 Photo: AFP: The sign on a school in Corsica announcing its closure.

At least 18 million children will be affected by the closure of all creches, kindergartens, schools, colleges and universities in France next Monday.

“Today feels like the last day when everything will be normal, or reasonably normal,” said Marine, parent of a 3-year-old girl and a 16-year-old boy, outside her daughter’s kindergarten in the 18th arrondissement or district. “The kids are going to school, people are going to work or having coffees in bars and doing their shopping, life is continuing. But everything will change on Monday.”

“I think it will be quite dramatic when we suddenly find ourselves completely stuck at home with our children, trying to work, trying to get them to study, trying to keep life going without panicking. French apartments are not big spaces.”

“And what are we going to do with the teenagers? Does the government really think they are going to stay indoors with their parents for weeks? They will go out on the streets with their friends, making a mess.”

Ruddy is the gardien or caretaker at the kindergarten. He described parents having a sense of resignation rather than panic as they dropped their children off this morning – and much confusion.

“All of our 150 kids have come to school as usual this morning, but lots of parents have been talking about what they are going to do – and most of them don’t know what they will do, how they will cope,” said Ruddy. “It’s not going to be just for a short time, this is going to last weeks. But this is all so new, they haven’t had a chance to come to terms with it yet.”

“There is a real sense today of ‘I don’t know what will happen’,” said Anne-Bernadette, a young mother of two as she delivered her 4-year-old son to the kindergarten.

“We also have a one-year-old and my husband and I both work jobs that will be very difficult to tele-travail. We will have to talk together tonight how we are going to manage it next week. The ideal would be if we could alternate, if one of us could go to work and the other stay home with the two children, and then swap. But I don’t know if we will even be able to keep going in to our jobs. And I don’t know what will happen if we can’t. We are trying not to panic but it is hard.”

The school’s director was determined to keep the panic at bay. “We are just going to take it a day at a time. Today is a school day and everyone is here for school, so that’s what we will do and we will worry about tomorrow when it comes,” she said as the bell rings for the last children to arrive.

Speaking on France Inter radio station this morning, the minister for education Jean-Michel Blanquer said that school closures will continue at least until the Easter holidays and that he does not have any information yet when it will end.

“The expression ‘until further notice’ is at the beginning of almost every sentence during this crisis,” said Blanquer. “What's fairly certain is that we're going to make it to at least the spring holidays. But this is not an extended holiday, quite the contrary.”

France’s two-week vacances de printemps, or spring holidays, start on different dates depending on where you live. This year, they begin on either April 4th, 11th or 18th. This means there will be no school until April 20th at the very earliest.

Blanquer said that schools will send children lesson plans on a shared internet platform that everyone has access to. This will be a reduced syllabus rather than the full educational programme.

“Students and their families will receive an internet link to connect to the distance learning. They will have all the necessary access to study from home.”

Blanquer said the idea was not to leave kids in front of screens all day. However, he also said that he was not encouraging parents to take their children to parks in order to avoid spreading the virus.

“Teachers have not been trained, and parents lack the necessary equipment.”

She said some version of school would be maintained because teachers would send work online to children. She advised parents to consider audio books and strategy games to occupy their children, which will all require much involvement from parents.

“My school has already started thinking about how to programme classes online as two teachers from Oise have already been in quarantine,” says Sarah, an economics teacher at a secondary school in the eastern suburbs of Paris. “But the problem with this is that some of my students don’t have printers at home, some of them don’t even have computers, so this will be unfair.”

“I will have three boys at home, aged from 7 to 18, and the 18 year old is supposed to be doing the BAC (the final school exam before university). He has an exam scheduled for March 27th, what will happen to that? How am I meant to stay at home with them, make them do their school work, help them with that, and also do my own work at the same time?”

Eddie, a father of two and a scriptwriter who can work from home, said this overnight decision to close all schools will prove very divisive for French society.

“We are the lucky ones, we have jobs that can adapt, we can work from home and still make a living. What about all the people who cannot télétravail?”

“What about the people who have to go out to clean hotels or work in supermarkets or in the post office or the chef in the bistro? What are they suppposed to do if they have kids? Leave them home alone when they go out to work?”