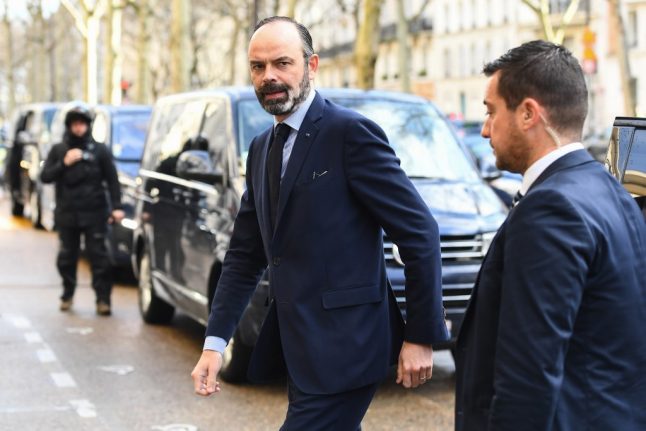 France's Health Minister Olivier Veran announced on Friday that the death toll linked to coronavirus had risen by 18 in the previous 24 hours to 79 in total.

He added that 154 patients were in a serious condition.

“The spread of the virus across our territory is accelerating, especially in certain regions,” Veran said.

He urged the public to limit contact and travel and to wash hands regularly.

“Respect social distancing, acknowledge someone rather than greet them physically, keep a metre distance and limit non-essential travel as well visits to the most vulnerable,” he said.

Earlier Prime Minister Edouard Philippe justified the measure to ban gatherings saying the aim was to delay as much as possible the spike of the coronavirus epidemic.

“It's because we are at the beginning of the acceleration that we take measures to slow it down,” Philippe said.

“I'm not saying there will not be others (measures)”.

“Our aim is to postpone the spike for a long as possible, and we have hope.”

“We want to keep French people healthy, even if it will have grave consequences for theatres and cinemas,” the PM said.

The move comes a day after President Emmanuel Macron announced that all schools would close on Monday March 16th “until further notice”.

France has currently seen 79 people die from the coronavirus, which has spread out to 3,661 confirmed cases.

The government had already banned all gatherings of 1,000 people, which had huge implications for the country. Concerts, sports events and other shows were canceled over the past week.

In the 10 'cluster' zones – where the majority of coronavirus cases have been diagnosed – local authorities had already issued stringent restrictions on public gatherings.

The cluster zones are in the Oise département to the north of Paris, Mulhouse in Haut-Rhin near the German border, two areas of Haute-Savoie near the Swiss border, Morbihan in Brittany, Calvados in Normany, Aude in southern France, the entire island of Corsica and parts of the southern city of Montpellier.

READ ALSO: MAP – The regions of France with the most coronavirus cases

A tenth cluster was a tour group that had travelled to Egypt, with 13 people testing positive for the virus.

The PM's announcement meant that the whole country was now largely following similar rules, as the government effectuated a push to contain the coronavirus spread once and for all.

On Thursday evening, Macron asked everyone over 70 to stay inside and limit their social interaction as much as possible.

The president also asked everyone who could to work from home (télétravail), promising the country's businesses that the state would bear the brunt of the financial burden of having people stay home.