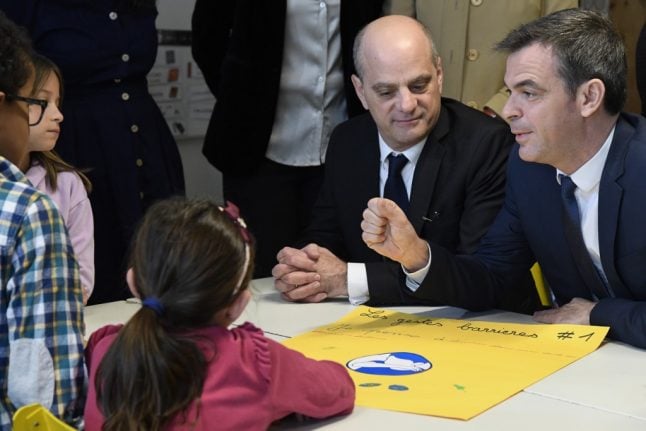 Schools close in France as of Monday, as part of a government effort to stem the spread of the coronavirus in the country. AFP

Francette Popineau, spokesperson of the country’s largest teacher’s union, FSU-Snuipp told The Local on Friday that she welcomed President's Emmanuel Macron's announcement that all schools would close “until further notice” on Monday March 16th.

“This is the right response,” she said. “We know that other countries that have closed their schools have managed to stem the spread of the epidemic, so we support this decision.”

It remains unclear how long schools in France will stay closed for with minister suggesting “at least two weeks” or until the spring holidays that begin in stages in early April.

Education minister Jean-Michel Blanquer said on Friday that he expects exams to go ahead in the summer.

Working parents, who will now have to look after their children at home, remain confused about their rights.

But France's Labour Minister Muriel Penicaud said all parents  with children under 16-years-old in nurseries or schools who cannot work from will have the right to sick pay.

She reminded parents there was no need to go to the doctor for a sign sick note (arrêt maladie) but that it would be declared by the employer.

She also said the sick pay would begin immediately, rather than after three days which is the norm for private sector workers.

However parents in France now face the question of what to with their children over the coming weeks, especially those who will have to continue working from home at the same time.

Union leader Popineau said France was not ready to have virtual online classrooms.

“Organising virtual classrooms would require all parents having access to a computer and a webcam. It's a very complicated process. We don’t have the tools necessary, and teachers haven’t been trained to do it,” she said.

“But this will not be a break. Teachers will send over tasks for the children to do at home to keep them busy. It’s important that these tasks are tailored so that the children are able to do them autonomously, without depending on their parents.”

“Parents they have a responsibility to make sure that the children complete the tasks that their teachers have sent over, but we don't expect to transform into teachers. We don't want them to either, as they don't have the capacity or the pedagogical means necessary.”

And her advice for parents

“It's important that parents use this occasion to learn together with their children at home,” she said.

“There are many things parents can do with their children, like playing board games to develop their children's strategic thinking and skills, using audio books or documentaries, or sing together.”