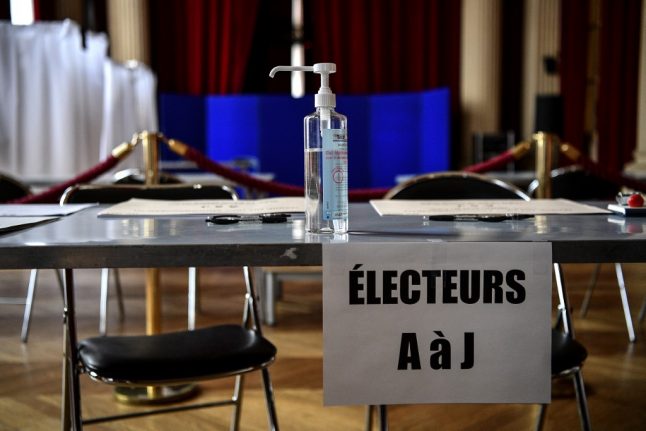 France's municipal elections will go ahead as planned on Sunday - although slightly differently than normal. Photo: AFP

In the midst of its greatest health crisis for more than a century, France will go ahead with the world’s largest and most complex exercise in local democracy this Sunday.

And that’s just the first round. Voters are expected to turn out again next weekend to choose mayors and councils in 35,000 cities, towns and villages – by which time the coronavirus epidemic will be much worse.

Who is to say whether it was the right decision by President Emmanuel Macron to allow the municipal elections to proceed? If he had cancelled or suspended the poll, he would have been accused of running scared of the voters rather than the virus.

The turnout, already poor in local elections in France, is likely to be reduced. Older voters, usually the most reliable of democrats, will think twice before leaving the homes in which Macron ordered them to shelter during Thursday night’s TV address.

An already opaque election is likely to become an even more confusing snapshot of the state of political opinion in France and a poor guide to prospects for the next presidential election in 2022.

But that won’t stop pundits, both knowledgeable and less knowledgeable, from proclaiming their opinions. Here is a brief and cautious guide to what to look out for on Sunday and in the decisive second round on 22 March (if it happens).

The results will, overall, be embarrassing for Macron and his three years old centrist party, La République en Marche (LREM). There may be one or two local triumphs – in Le Havre or Strasbourg –  but LREM, the party of government, is running third or fourth in many large towns and cities or not running its own lists of candidates at all. LREM party member Agnès Buzyn was France's health minister, but she left the post (and the coronavirus) to join the race to become the next mayor of Paris. Photo: AFP

The results will partly reflect Macron’s unpopularity after a bruising 18 months of street protests and contested social and economic reforms. They will also expose the President’s failure to turn his centrist revolution of 2017 into a grass-roots political movement – both nationally and locally.

One senior LREM figure told me: “We are like a small start-up that is trying to run Microsoft. We just don’t yet have the numbers and quality of people and institutional expertise to create a political party from the bottom up – or the top down.”

Paris, a hot-bed of Macronism in 2017 and in the European elections last year, was supposed to be LREM’s saving grace. The party’s first candidate, Benjamin Griveaux, already struggling, imploded in a sex scandal last month. His replacement, the former health minister, Agnes Buzyn, is doing a little better but has found no miracle cure.

As things stand, the unpopular Socialist mayor, Anne Hidalgo, looks like she will have enough allies to win re-election after the second round. However, the former Sarkozy-era justice minister, Rachida Dati, widely mocked a couple of years ago, has fought an unexpectedly good campaign. There is a small chance that she will come out top on 22 March. Elsewhere, the Prime Minister Edouard Philippe has parachuted back into Le Havre, where he was a very popular mayor, to try to give Macron at least one headline victory. The campaign in the Channel port city is not going as swimmingly as Philippe expected but he should win on Sunday week.

Marine Le Pen’s far right Rassemblement National hopes that the local elections will confirm her position as the most plausible challenger to Macron in 2022. But the RN, strapped for money and competent candidates, has concentrated its resources in only 300 towns and cities – a big drop on the last local election in 2014.

The RN will hold the dozen town halls it runs. It will almost certainly capture Perpignan in the south west, where Le Pen’s estranged boy-friend Louis Aliot is running for mayor. The far-right party is running strongly in Avignon but probably not enough to win in the second round.

The true importance of the election for the far-right will be the number of council seats it gains – boosting Le Pen’s chances of winning Senate seats in September when half of the upper house will be re-elected, not be ordinary voters but by other elected officials.

The performance of the Greens – EELV or Europe Ecologie Les Verts – will also be interesting. With other left or “progressive” parties feeble and scattered, the Greens may provide the strongest challenger to Macron from the left in 2022. France will be headed for the polls on Sunday, as the country tries to grapple with the coronavirus epidemic. Photo: AFP

Green-led lists are currently leading the polls in Grenoble and Rouen and placed second in Toulouse, Bordeaux, Strasbourg, Dijon and Metz. If confirmed, this represents a big Green breakthrough in local politics in France. There have been Gallic green dawns before but the implications for 2022 – with the rest of the Left so weak – are fascinating.

Small wonder that Macron has said he will devote much of the remaining two years of his mandate to environmental issues.

To boost their chances of gate-crashing the Macron-Le Pen rivalry in 2022, the centre-right Les Républicains (party of Sarkozy and Chirac) also need a strong showing in the municipal elections after a disastrous outcome (8%) in the European elections last spring. The same applies to the Socialists (party of Mitterrand and Hollande) who are struggling to survive as a serious force in national politics, squeezed by both Macron to their right and splinter parties to their left.

Local government in France beats to a different, more repetitive drum than national politics. Even the Communist Party, which vanished long ago as a national player, retains municipal fiefdoms in the Paris suburbs and the fringes of other conurbations.

There will probably be centre-right victories in Marseille, Nice, Toulouse and Bordeaux and Socialist victories in Lille and Dijon. But there will be nothing to indicate a strong resurgence of France’s once traditional “parties of government.”

In other words, the likely results in big cities will neatly illustrate the opacity of municipal elections as a guide to the national mood.

What to make of a poll which leaves France with Socialist mayors in Paris, Lille, Dijon and Brest; centre-right mayors in Marseille, Bordeaux, Toulouse and Nice; “Macronist” mayors in Le Havre and Strasbourg;  and a green mayor in Grenoble and maybe Rouen?