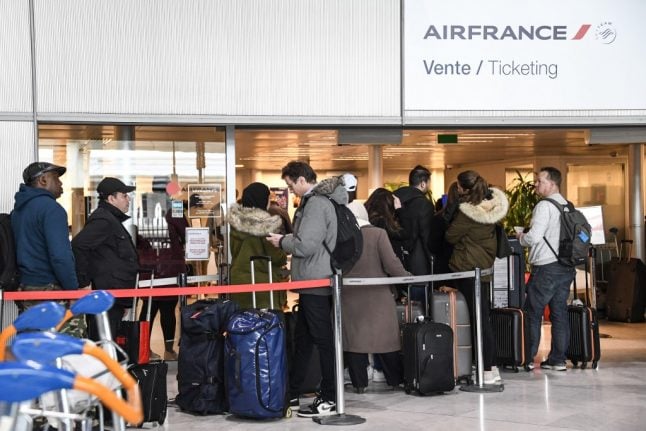 US president Donald Trump announced on Wednesday night that all travel from Schengen zone countries – including France – would be banned from 11.59pm on Friday, in an attempt to stop the spread of coronavirus.

The ban as announced has a lot of exemptions and loopholes, but the uncertainty over what happens next has caused panic among many Americans who were in France for holidays, work or visiting relatives. With the announcement that the ban would come in to force on Friday night, many entered a desperate last-minute scramble to get home.

You can stay up to sate with the latest on the situation in France here.

From what we know at the moment it appears that the ban does not cover US citizens or their close family (which includes parents, children and spouses but not partners).

There are also no restrictions on flights from the UK and Ireland and airline or boat crew are exempt.

However with vast numbers of people cancelling their trips, many fear that airlines will soon begin to scrap flights rather than fly virtually empty planes.

The US Department of Homeland Security says it will give more detail over the next two days, so it's possible that some of the loopholes mentioned above could be tightened up.

And all the uncertainty has caused a great deal of concern, with many people scrambling to get back before the ban comes in to force.

Below are the experiences of New York Times journalist Mike McIntire, who was in Paris when he heard the news.

Bedlam at U.S.-bound airlines at CDG in Paris early this a.m., as Americans pay as much as $20,000 for last-minute flights. pic.twitter.com/kkbOAEFn4Y

2/ I know because I’m one of them. Was awakened at 2:15 am Paris time by a concerned relative in America saying “Trump just banned all travel from Europe!” Turning on TV, I saw that indeed appeared to be so.

3/ Had planned on returning to NYC Saturday, but fearing what now appeared to be a deadline of midnight Friday to get out, jumped online and tried to change flights. Unable to. Called Delta and was told there was 4-hr wait time to speak to someone.

4/ Looked at buying completely new tickets for today or Friday and saw prices rising and tickets disappearing before my eyes. Fearing the worst if we did nothing, I pulled the trigger on new tickets that cost more than my monthly mortgage payment.

5/ But wait! The TV says Trump erred and Americans are actually NOT covered by the ban. I scramble to cancel the tickets I just bought and cannot. Delta and Amex Travel web sites won’t let me. Calls are made. Delta now has 6-hr wait, Amex plays music for two hours and disconnects

6/ Now we have tickets for two flights to NYC: our original one on Saturday and a new one for today. Went online and tried to at least cancel the Saturday flight (see above tweet for details on how that went).

7/ Went to CDG airport and tried to get refund at the Delta counter, but 100 people are in line. Said screw it and just got on the plane, which is where I am right now with a bunch of other exhausted Americans being served complimentary Peach Bellinis.

Just to clarify, I didn’t spend $20,000 on tickets (what I DID spend was bad enough). A Delta ticket agent at CDG told me that’s how much one American passenger spent online in the hours after President Trump’s announcement.

There were similar scenes at airports around Europe, including London Heathrow and Schipol.

“We were about an hour into our flight from Salt Lake City when we got news of the travel ban to the United States, so we are trying to get back home now,” an American who gave her name as Michelle told AFP as she waited at Paris' Charles de Gaulle airport.

“Hopefully we can get a flight out tomorrow, I don't know. We are just trying to get in before we can't.”

Jennifer, who hails from Idaho, said she was in the air when the announcement came, “so we really have no information… We are told that we need to be back by Friday, and that's all I know.”

French travel agents estimate that about 100,000 people who have booked trips to the United States via agencies in France will be affected by the anti-virus measure.

“It is the worst news for airlines, and it is the worst situation for us,” Rene-Marc Chikli, president of a French tour operators' federation, told AFP.

Have you been affected by the travel ban? Share your experiences at [email protected]