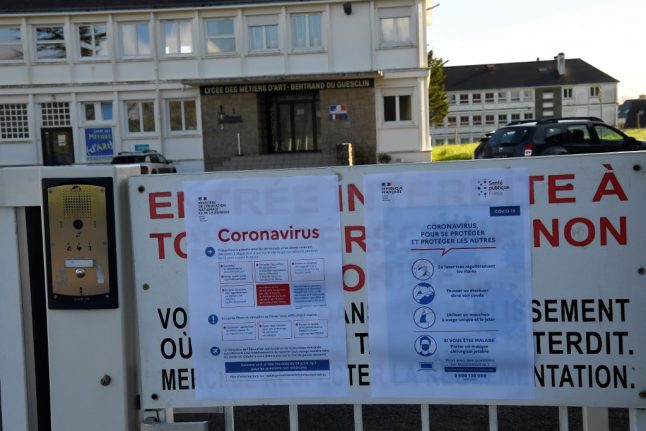 Schools in some parts of France are closed. Photo: AFP

The first thing to make clear is that not all schools in France are closed by any means, and education minister Jean-Michel Blanquer has said that it had “never been envisaged” that all of the country's schools would close, because it would be “counter-productive” to “paralyse a large part of the country.”

But in the worst affected areas, including the départements of Oise and Haut-Rhin plus parts of Brittany and the island of Corsica, all schools, colleges and nurseries have been closed for 14 days. The bans are currently affecting around 40,000 pupils in total.

There are also individual schools all over France that have closed or partially closed after a coronavirus diagnosis in a pupil or teacher.

On Thursday it was announced that one of the campuses of Paris' famous Sorbonne university was closing after a staff member tested positive for the virus.

So what does this mean if you are a parent and you suddenly can't go to work because you need to look after your children?

Well for some people working from home is an option. The government says that people should work remotely where possible, as president Emmanuel Macron demonstrates with this conference call to fellow EU leaders. Photo: AFP

The French government has advised that télétravailler, or remote working, is a good balance between maintaining social distancing and keeping the country ticking over as normally as possible.

During the coronavirus outbreak, bosses have been told to treat sympathetically requests to work from home, both for people who are self isolating on health grounds or for people whose children are not able to go to school.

But not all jobs can be done remotely, and if you can't work from home and are unable to arrange childcare you are entitled to paid sick leave.

The French government passed a special decree on February 20th stating that anyone who was self-isolating on medical advice, or whose children were unable to go to school due to coronavirus, is entitled to 20 days paid sick leave.

The government hoped that by making this clear from the start people who need to self isolate will do so, rather than worrying about losing wages.

Of course the people who frequently step into the breach during a childcare crisis are grandparents, but with coronavirus disproportionately affecting elderly and ill people, many parents may decide against this option.

The majority of deaths so far have been among people aged 75 or over with a serious underlying medical condition, so frail or ill grandparents may not be the best babysitters in this situation.

READ ALSO MAP Which parts of France are worst affected by coronavirus?

Such is the concern about older people that visits to the country's Ehpad nursing homes have been banned during the outbreak.

And it's not just parents who are potentially affected by this ban.

If a large part of the workforce has to stay at home to look after the kids, this will have a knock-on effect on the rest of the economy.

It's early days so there's not a lot of data on this, but if you are in a cluster zone then don't be surprised if some shops and restaurants, especially small, family-owned ones, have to either close or reduce their opening hours.

On a larger scale, many businesses and public services are already doing impact assessments.

Schools in the greater Paris region are not closed, but city transport operator RATP has already completed a contingency plan on the reduced services it will be able to run if schools close and a significant portion of their employees have to stay at home, since driving a Metro is a definitely an example of a job where working from home is not appropriate.