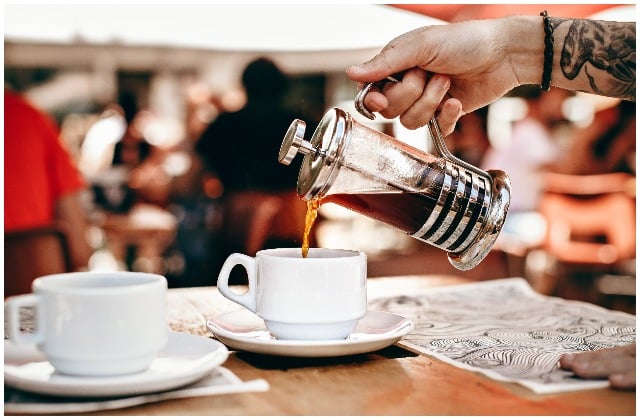 Photo by Helena Lopes on Unsplash

French is strongly influenced by Arabic. Only Italian and English have influenced the French language more.

Roughly 500 French words come from Arabic, and about 100 of these have become so integrated into the French everyday language that most people don’t even know that they weren’t French to begin with.

Here’s a look at some of the most common ones.

One of France’s favourite drinks – coffee – comes from the Arabic word qahwa. Venetian traders brought qahwa with them to Europe in the 12th century, but the coffee bean didn’t make it to Parisian cafés before 1657. Coffee is today an important part of the French diet, often accompanied by a croissant, a tartine de confiture (bread with jam) or perhaps a cigarette.

The French borriwed their sucre (sugar) from the Italian word zucchero, which the Italians got from the Arabic sukkar. We can thank the Arabs not just for the word, but also for bringing sugar to Europe when they invaded the Italian regions of Sicily and Andalusia back in the 7th and 8th century.

The French word for alcohol comes from the Arabic word kohl, which was used many centuries ago to signify a “very fine antimony powder” – referring to the kohl that some people used as make-up.

In the 16th century the Spaniards took the term and turned it into alcohol, which then meant “a very fine and pure element” of which the “essence was obtained through distillation” – which we today know as the magic little ingredient found in French wine, cider, pastis and a host of others. Pastis may be a symbol of Frenchness, but alcohol is a foreign import. Photo: AFP

‘Store’ or ‘supermarket’ is another word the French borrowed from the Arabs, who use maḵāzin for “storeroom” or “storehouse.”

The French word for ‘candle’ was imported in from Béjaïa, a small town east of Algiers. Back in the old days, Béjaïa was a commercial hotspot that exported lots of merchandises. The town was nicknamed ‘Bougie’ after the wax used to make candles.

While razzia  (raid) is Italian, the Italians borrowed it from the Arabic ghazwa, which referred to an ‘enemy invasion’.

Jupe (skirt) is another French word that, although it was not directly borrowed from Arabic, came from the Italian word giubba, which again was inspired by the Arabic jubba.

At its origin, jubba referred to the toga, originally worn by men rather than women. But by the time it made French language guardian Académie Francaise’s Dictionary, back in 1694, it had become an item of women’s clothing.

Today, niquer is a very colloquial French way of saying ‘having sex’. It’s similar to saying ‘screw’ in English, Like ‘screw’, niquer can be used as a way to say you were ‘screwed over’ (je me suis fait niquer).

‘Macron loves screwing teachers’ reads one of the signs at today’s protest about public sector pension reforms. (For anyone who doesn’t know the French president and his wife met when she was his teacher) https://t.co/khLsM3vEU1

However, niquer originated as north African slang – nik meant ‘making love’ and nikāḥ meant ‘coitus’ – through a dialect known as ‘sabir’, which was a mix of Arabic, Italian and Spanish spoken by merchants and sailors at the time.

It exists in Italian and Spanish too (meschino and mezquino), but comes from the Arabic miskīn, which means poor. French people use it about someone who ‘lacks generosity’, meaning someone who is is ‘petty’ or ‘stingy’. It’s most commonly used among French people who also speak Arabic, so it’s one of the many words that originated in the French suburbs among immigrants and spread out into wider use.

You can read more about seum here.

Kiffer is popular French slang for ‘love’. Je te kiffe means ‘I love you’ although not in the romantic sense, more like ‘adore’, ‘worship’ or ‘dig’. For example, you would say that you kiffe someone’s music if you find it really cool.

However kif is also originally Arabic, meaning ‘pleasure’ or ‘joy’. It was apparently used when talking about the joyous effect of smoking tobacco or stronger substances (in Egypt, keif meant hashish).

“I really want to piss off the unvaccinated,” French President Emmanuel Macron, drawing widespread condemnation for his choice of language.

In an interview with Le Parisien, he said that la bêtise (“stupidity”) was the “worst enemy of democracy”.

It is not the first time that the leader has used fruity language since being elected.

He has variously described the French as fainéants (lazy), les gens qui ne sont rien (people who are nothing), and Gaulois réfractaires (Gauls who are resistant to change). During a visit to a factory, he once said that protestors outside of a factory should go to work rather than foutre le bordel (“fuck things up” – or literally, “fuck up the brothel”).

Serving as the Economy Minister under the presidency of François Hollande, he said “there were lots of illiterate people” during a visit to an abattoir.

“In a certain way, we are like prostitutes: this job is about seducing,” told the Wall Street Journal in 2015, describing his former job as a banker.

Other French leaders have dished out their fair share of provocative statements – some more discretely than others.

Macron’s predecessor, François Hollande, allegedly referred to the protesters and poor people as sans dents (toothless people). The revelation came after his 2017 election defeat and was disclosed by his ex-partner, Valérie Trierweiler – although we should probably point that she wasn’t exactly his biggest fan after he was caught having an affair with an actress while they were together.

Nicolas Sarkozy, who served as president from 2007-12 is perhaps the most prolific French head of state when it comes to outrageous language.

During a visit to the 2008 Salon de l’Agriculture, he was shaking hands with people in the crowd.

Sarkozy described Hollande as an amateur, mal fagoté (shabbily dressed) and un président ridicule (a ridiculous president). He said of his own party that they were tous des cons (all idiots). He described Marine Le Pen as une hommasse (mannish/butch), Xavier Bertrand as un médiocre and François Fillon (who served as Prime Minister during Sarkozy’s presidency) as un loser.

As Interior Minister, Sarkozy described the residents of Argenteuil as racaille (scum) after a visit to the Parisian suburb saw his convoy ambushed by people throwing objects from tower block.

Jacques Chirac is best known internationally for his opposition to the American-led invasion of Iraq in 2003.

While he may have been reluctant to launch military attacks, verbal assaults were his strong point.

Before becoming President, he served as Prime Minister where he met with Margaret Thatcher at a European summit. After a disagreement, he told reporters: Mais qu’est-ce qu’elle veut en plus cette ménagère? Mes couilles sur un plateau? (What does this housewife want? My balls on a plate?)

As the founding father of the fifth republic, it would be wrong not to include Charles de Gaulle on this prestigious list.

In 1968 the president used the word chienlit to describe the social disorder around the 1968 student uprisings. It translates as “shitting in your own bed”.

Huh?
Er, De Gaulle opened a cabinet meeting by calling the May '68 student uprising "la chienlit" (shitting in your own bed) and his prime minister in 1966, Pompidou, pioneered the presidential use of "emmerder" (piss off).

My hunch is Macron will get a small poll bump from this https://t.co/Um50x61KWa

Macron is something of a fan of De Gaulle, even including one of the General’s books in the background of his official portrait, so perhaps he is also emulating his language?

Georges Clemenceau was the Prime Minister of France during the latter part of WWI. He was known to have a difficult relationship with his British counterpart, David Llyod George. He once said je pouvais pisser comme il parle (I could piss when he speaks).

Clemenceau described one of his political rivals, the pacifist Jean Jaurès, as a “dangerous imbecile”.

Napoleon Bonaparte was betrayed by one of his ministers, Charles-Maurice de Talleyrand-Périgord, who sold state secrets to France’s enemies.

After finding out, Napoleon reportedly said Vous êtes de la merde dans un bas de soie! (You are shit at the bottom of a silk stocking).

Coincidentally, Talleyrand is the man credited with popularising escargots in France.