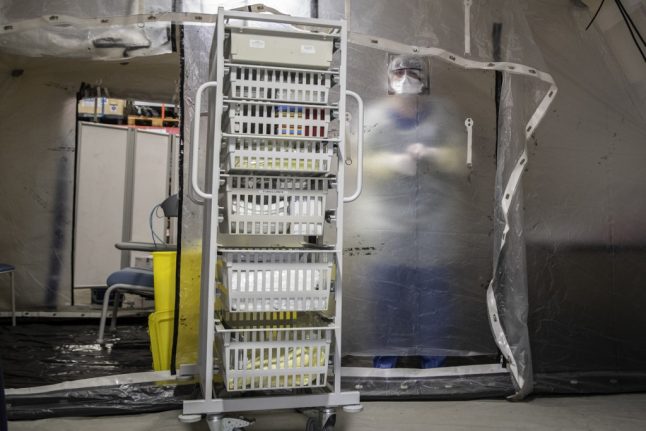 China, where the virus was first recorded, remains by far the worst affected country with more than 80,000 cases and over 3,000 deaths.

In Europe, Italy is the hardest hit country with nearly 10,000 cases and more than 600 deaths.

France and Germany have more than 1,000 cases each, but while the death toll in France is more than 30, only three people have died so far in Germany.

Spain on the other hand has 47 deaths and over 2,000 confirmed cases.

You can follow live updates of the latest situation in France here. So what is behind these large variations in death rates?

At this stage little is clear as this is a new illness and scientists need a lot more data and time before they can draw firm conclusions. The situation is changing every day and in a couple of months there will probably be a lot more clarity on this.

That said, there are certain trends that could explain the differences.

READ ALSO: How do we explain the low coronavirus death rate in Germany?

The biggest effect on the percentage death rate is how many people each country tests.

Around 80 percent of people with coronavirus only get mild symptoms and many of them will probably not go to the doctor. Coronavirus is of the same family as colds and flu with several similar symptoms, so many cases may be going misdiagnosed.

A country that only tests the people who end up seriously ill will end up having a high death rate. If, however, there is widespread testing that identifies people who have the virus but only have mild symptoms then the death rate as a percentage becomes much lower.

The World Health Organisation is currently estimating the worldwide death rate at about 3.5 percent while France's death rate stands nearer 1.8 percent – but the international figure includes countries that do not have widespread testing in place.

Italy's death rate, based on a calculation of deaths per number of confirmed cases has been over the 6 percent mark, while Germany's is as low as 0.2 percent.

These calculations obviously don't tell the true picture, because they depend on the number of confirmed cases and therefore on each country's policy of testing.

Many coronavirus cases will simply have gone undetected.

READ ALSO What do we know so far about the people who have died in France?

There is also some variation between countries on exactly how coronavirus deaths are recorded. The vast majority of the people who have died so far have been elderly and had one or more serious underlying health issues.

Stage of the outbreak

The virus is slowly spreading round Europe so different countries are at different stages of the illness. There had been a handful of cases in January, almost all connected with people who had travelled from China, but the first widespread outbreak was in Italy on February 22nd.

This spread within a few days over the border to France, with countries including Switzerland and Germany reporting more cases in the days following.

Public health experts say that the UK is currently about one week behind France and two weeks behind Italy in terms of the stage of the outbreak.

Many of the people who have died so far have been in a serious condition for days or even weeks before their death.

The stage of the illness also affects the profile of the patients. In the early stages most cases were linked to people who had recently returned from Italy and were therefore fit enough to travel.

Italy is a popular destination for both ski trips and family holidays in France, giving patients a reasonably young and fit profile. However once the virus began spreading within France, the elderly and vulnerable were more likely to be infected. Giving clear and concise public health information is vital for countries that have an outbreak. Photo: AFP

Fairly obviously, if you are seriously ill you stand a better chance of survival in a country that has good hospitals and a high number of intensive care beds.

In Lombardy, the region of northern Italy which is home to around two thirds of the country's fatalities, hospitals are overrun and struggling to cope with the sudden spike in cases. As of March 10th Italy still had 877 people in intensive care and the numbers were rising.

Health professionals in Lombardy report having to set up intensive care beds in corridors. France's hospital's have so far avoided a huge spike in seriously ill patients requiring intensive care treatment. While they are preparing for the worst and “on a war footing”, hospitals including those at the centre of regional outbreaks insist things are under control.

But public health is also important – how quickly and effectively each country broadcasts its health advice and how obediently the population follows this advice are crucial factors.

For countries with higher infection rates there are also civil measures – from bans on gatherings of more than 1,000 people in France and Germany to full scale quarantines and lockdowns in Italy.

These measures are all essentially aimed at containing the spread of the virus and keeping infection rates at a level that healthcare services can cope with.

A sudden large spike in infection rates leads to both panic and the health systems being overwhelmed – with potentially fatal consequences for both coronavirus patients and people with other serious illnesses.

Older people, particularly those with ongoing health conditions, are more vulnerable to a range of illnesses, but coronavirus seems to be more concentrated among the elderly.

By contrast coronavirus fatalities are generally older people. In France the youngest person reported to have died so far was 60 and 23 of the 33 people who have died so far were both over the age of 75 and suffering from a serious medical condition, said Director General of Health Jérôme Salomon.

He also added that in France, 98 percent of patients who have coronavirus recover.

The same trend can also be seen in Italy, where the average age of those who have died is 81 and in more than two thirds of cases patients had three or more pre-existing medical conditions.

EU statistics show Italy has the oldest population in Europe by almost any count.
It has the lowest percentage of young people, and a higher percentage of those aged over 65 (22.6 percent as of 2018) than any of the other member EU states.

Both Italy, France and Germany are urging people to “show solidarity” with the elderly and vulnerable by following government health advice and both have asked people to limit visits to elderly friends or relatives in order to avoid potentially infecting them.