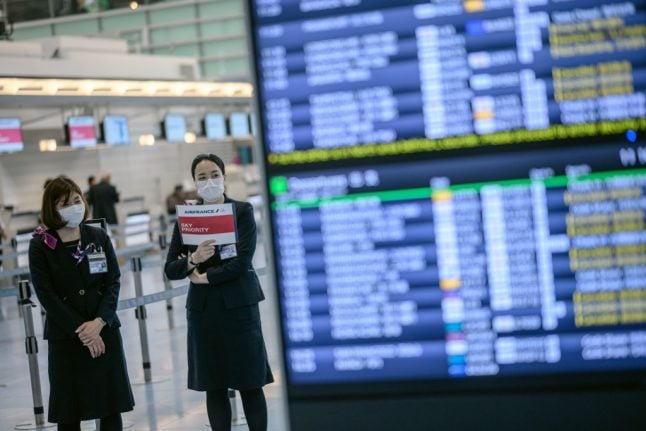 Whether you're planning a holiday in France or just need to travel around the country, readers are asking what restrictions coronavirus has imposed on travel in France.

You can follow our live coverage for the latest on the situation in France here.

France itself has not imposed any restrictions on flights but the country is covered by the USA's ban on flights from Schengen zone countries.

The ban, announced on Wednesday night by US president Donald Trump, seems at present to have more holes than Swiss cheese, but at this stage it looks like flights from the US to France are not affected and the ban does not cover American tourists. Flights that include transfers in the UK also seem to be exempt.

However it's early days and it's possible that some of these loopholes will be tightened up in the coming days. So while at present Americans can still come to France, they may face problems getting home.

It's also possible that as demand falls airlines themselves will cancel flights rather than fly with very few passengers.

The uncertainty surrounding the new rules has prompted panic among American tourists who fear not being able to get home, with reports of chaotic scenes at Paris' Charles de Gaulle airport on Thursday morning.

Bedlam at U.S.-bound airlines at CDG in Paris early this a.m., as Americans pay as much as $20,000 for last-minute flights. pic.twitter.com/kkbOAEFn4Y

Away from transatlantic routes, any flight disruption has been largely down to individual airlines cancelling, although some countries including Israel and the Czech Republic have put in place restrictions on travellers from France.

Flights between France and Italy are heavily disrupted, although the Italian government's new quarantine measures do not ban flights. Air France, Ryanair and Easyjet have all suspended all flights to and from Italy until early April.

So far no airlines have cancelled routes to France, but some flights have been axed due to falling demand. British Airways has announced the cancellation of several flights over the next month for this reason.

We might soon be seeing more cancellations after the European Commission proposed relaxing it's 'use it or lose it' rule which has seen some airlines operate nearly empty flights for fear of losing their airport slot.

And on a slightly related note, British regional airline Flybe – which ran dozens of routes to France – has gone bust, with the already troubled company saying that coronavirus cancellations were the final straw.

France decided early on that measures like temperature screening at airports were not useful – given the virus' long incubation period – so there are no health checks at airports, but patients arriving from certain destinations are given advice on symptoms, testing and self-isolating.

The French government says that anyone travelling from China (including Macau and Hong Kong), Singapore, South Korea, Iran or the Veneto, Lombardy or Emilia-Romagna regions of Italy should self isolate for 14 days.

There are also some countries that have imposed restrictions on people travelling from France including Israel, North Korea, Russian, Iraq, Moldova and El Salvador.

READ ALSO What are the rules on coronavirus self isolating and quarantine? There is currently no listed disruption on national train services, although French rail operator SNCF is offering free cancellations or alterations on pre-booked tickets.

Train routes from France to Italy have suffered some disruption with the Thello service between Paris and Venice and Milan and Marseille cancelled until April.

SNCF says it is waiting for guidance on its France-to-Italy routes. Since February trains have been stopping at the border and swapping French crews for Italian to minimise the movement of people between countries.

There are currently no restrictions and city public transport, which was specifically exempted from the ban on gatherings of more than 1,000 people.

In Paris transport operator RATP has stepped up its cleaning routine and government health advice is being broadcast on the Metro, tram and bus services.

Although there are currently no plans to restrict transport, RATP is currently preparing contingency plans for staff shortages if, for example, schools are closed meaning that employees with children have to stay at home.

Fortunately the mass transportation strikes in December means that the company is well prepared for operating with fewer staff than normal.

There are currently no restrictions or alterations to either ferry services or Eurotunnel services although ferry companies are bringing in extra hygiene measures on board.

READ ALSO Coronavirus events ban – what is cancelled in France So far, no countries have advised their citizens to avoid travelling to France, countries such as the UK and Ireland simply recommend that people be aware of the latest developments and follow the French's government's health advice.