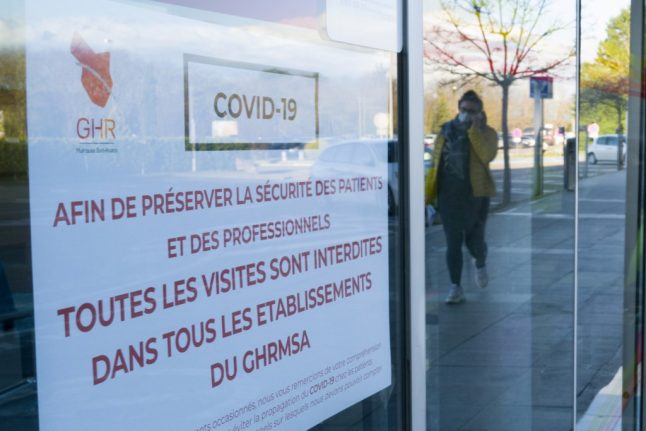 The phones are ringing incessantly at the hospital in a city that has emerged as one of the main hubs for infection in France, even if it insists that the situation is for now under control.

In one of the three rooms opened to deal with calls, thirteen doctors and assistants attempt to differentiate regular emergencies from calls related to the coronavirus.

“We've rarely seen anything like it. Often, it's temporary. But here, the problem is that it's lasting,” said Doctor Laurence Maka.

Healthcare workers in Mulhouse, a city near the Swiss and German borders, are racing to contain a coronavirus outbreak that is one of the most severe in the country.

Many of the cases have their origin in a week-long church gathering organised by an evangelical church attended by some 2,000 people which has seen cases since travelling as far as South America.

“At the moment we probably have a dozen or so patients in intensive care in very serious condition,” said the head of accident and emergency in the hospital, Marc Boizet. Jean-Luc Reitzer, the local MP for the Haut-Rhin department who was the first French lawmaker to test positive for the virus, is among those in intensive care.

Local authorities said late Monday that there were 193 cases of coronavirus in the Haut-Rhin region where Mulhouse is located, one of the highest concentrations in France.

Most of the cases in all of eastern France were linked to the meeting of the Christian Open Door Church in Mulhouse from February 17th to 24th, a statement by the local authorities said.

'Not managing to pick up'

“That's when (she) was infected. The problem is that she stayed with us for a week,” the 49-year-old said between coughs from behind his protective mask at the hospital.

He has since tested positive for the virus. Those who attended then spread the virus across France and even as far as the overseas department of French Guiana in South America.

Deflandre was waiting at the hospital entrance for his wife's results, who was sent for tests by the emergency medical hotline.

Phone calls to the hospital have exploded since the outbreak. “We registered 1,900 calls” on Monday, of which 1,200 were in relation to the coronavirus, said Noizet at the press conference.

There are still “a third of calls that we're not managing to pick up,” he said.

In normal circumstances, the emergency hotline line receives 450 to 500 calls. People in the emergency dispatch room in Mulhouse. Photo: AFP

The situation has forced the establishment to take drastic action to face the unprecedented crisis, said Corinne Krencker, who leads the region's hospital network.

The director activated the “white plan” on Saturday, a series of measures designed to deal with exceptional health situations.

“It is a huge challenge. We are on a war footing,” she said.

The “white plan” was also put into place at the Colmar hospital, another establishment in Mulhouse treating people infected with COVID-19.

The hospital has opened four units to deal with the virus, cancelled non-urgent operations and opened a structure to diagnose infections.

Retired doctors have been requisitioned. Guy Fuchs, a 72-year-old general practitioner, doesn't mind. “I think that anyone, if asked, would come,” he said.

“We can see everyone's solidarity every day, which happened immediately,” said the head of the Regional Agency for Health in the Haut-Rhin region, Pierre Lespinasse.

But the health system is reaching saturation point, warned Marc Boizet. The Emile Muller hospital is now only screening patients with severe symptoms.

For the moment, the hospital is managing to deal with the crisis, he said.

“But it's possible that at one point we won't be able to cope and will have to lean on satellite establishments,” he added.