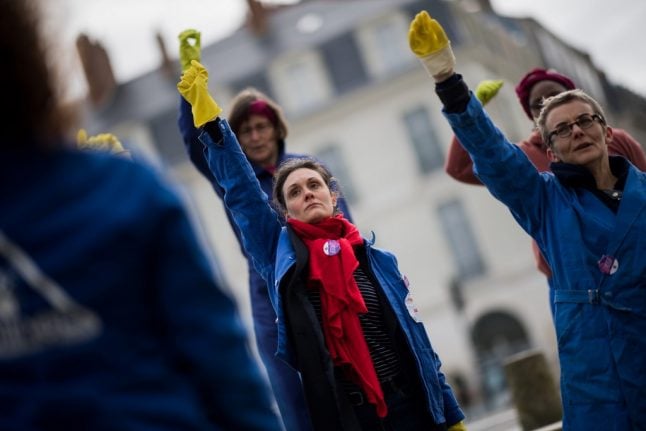 Women all over France took to the streets on Sunday for international women's day, the day after police used force to disperse a feminist protest in Paris. Photo: AFP

In one video, published around 11pm, a group of police officers was seen running towards protesters, hitting them with batons and throwing some of them on the ground.

The “symbolic nocturnal march” was organised to depart at 8pm in central Paris as a precursor to the big protest planned for the celebration of international women’s day the following day, March 8th.

The incidents occurred as police tried to disperse the protesters after the march was due to finish at 10pm.

Author and filmmaker David Dufresne tweeted at 11pm on Saturday that protesters were being “forced into the Metro” in central Paris.

The following day, French politicians condemned the police for a disproportionate use of force.

Paris Mayor Anne Hidalgo said she was “shocked by the unacceptable and incomprehensible violence” and that she “supported the female and male protesters.”

“All women must be able to peacefully protest to make their rights respected!” she tweeted, stating that interior minister Christophe Castaner had asked the Paris police department to file a report about Saturday's incidents.

Publicly condemning police officers is not something the French government does lightly or often, and Schiappa later walked back on her criticism, telling French TV that the reason for the violence had been that the “course of the protest was not respected.”

France has become used to seeing images of clashes between police and protesters since the 'yellow vest' social movement made it a mission to film and upload violent incidents online.

Earlier this year, scenes of police and firefighters fighting on the streets of the capital caught international attention.

READ MORE: How the 'yellow vests' made France have a national conversation about police violence Gender equality minister Marlène Schiappa said all women have the right to protest to have their rights heard following the clashes with police on Saturday. Photo: AFP

But the police said their use of force was merited, as the protesters had remained on the streets even after the march was set to end.

In a press statement published on Sunday, March 8th, the Paris police said that groups of protesters had “intentionally disrespected” police orders, resulting in the “police having to use tear gas and push the protesters back.”

Nine people were arrested during the protests, according to the police. Femen feminist group protesters made a comparison with the coronavirus and the 'virus of patricarchy' in Paris on March 8th. Photo: AFP

The following day, International Women's Day, saw tens of thousands of people in Paris join a demonstration which passed off peacefully, although with some reports of the police firing off tear gas in the afternoon.

However there was violence at an official event in Nantes in the afternoon. Participants at the feminist march told French press that the police had fired off tear gas grenades into the group of protesters, despite children being present.

“My girl nearly got hit in the head by a [tear gas]  grenade,” one woman told France 3.