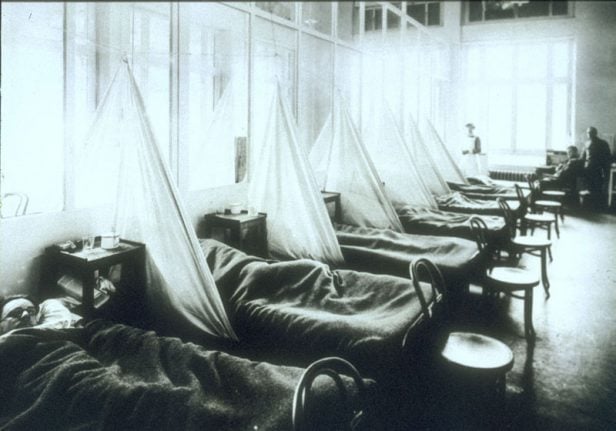 The latest developments in coronavirus are dominating the headlines, but the territory that now constitutes the French nation has been hit time and again by both epidemics and pandemics.

Today, we’re taking a look at the effect of these outbreaks on French history.

Gaul was one of Rome’s most treasured provinces, and significant in acting as a bulwark against incursions from tribal groups arriving from the East.

A complex system of roads, and a number of heavily-fortified military forts were an essential investment in the region. However, they could also have played an important role in its eventual fall.

The Antonine Plague, brought back by troops returning from Parthia in 165CE, quickly made its way along Gaul’s road systems and seriously impacted troop numbers.

The disease, thought to be a strain of smallpox, meant that all available new troops, often raised from subjugated tribal groups, had to be used to replenish diminished numbers, and not to reinforce or expand Rome’s borders.

In many ways, the Roman presence in Gaul never truly recovered from this first hit to their power. While corruption, shortages of new slaves and political turmoil were leading the Western Rome Empire towards decline, it was the Plague of Justinian that really hammered the nail in its coffin.

Arriving in 541CE, it ravaged France, Italy and much of the Mediterranean world.

Thought to be a strain of Bubonic Plague, some historians and epidemiologists think that it killed up to 50 million over two centuries of recurring outbreaks. With troop numbers further depleted, it was only a matter of time before Gaul’s borders fell to the Germanic peoples, Goth and Vandals arriving from the East. Located in the heart of the medieval European world, France was also severely hit by the Bubonic Plague, or ‘Black Death’, arriving in 1348CE.

Rumours had spread of the disease for a while, and in Paris, one of the great centres of learning at the time, scholars at the university issued dire prognostications: “We say that the distant and first cause of this pestilence was and is the configuration of the heavens. In 1345, at one hour after noon on 20 March, there was a major conjunction of three planets in Aquarius. This conjunction, along with other earlier conjunctions and eclipses, by causing a deadly corruption of the air around us, signifies mortality and famine.”

In Avignon, the seat of the papacy at the time, Clement VI held audiences between bonfires, on which aromatic herbs and flowers were thrown. This speaks to the medieval belief that foul-smelling vapours, or ‘miasma’ carried disease.

The Pope survived the pandemic, but this was probably due to the fact that the fleas carrying the bacteria yersinia pestis could not survive in such heat.

The ‘Black Death’ subsided around 1351, having killed fifty million – almost sixty percent of all Europeans. However, France would continue to be hit by outbreaks of the disease until the 18th century, when an outbreak in Marseille killed 100,000 people in the surrounding area.

One can still see the scars of these outbreaks across France, in the plague chapels and churches dedicated to St Roche, the mass graves, or ‘plague pits’ that are unearthed during construction, and the deserted medieval villages that advances in aerial photography are increasingly uncovering.

While France was susceptible to the same diseases in the 19th century that ravaged most European nations – malaria, cholera, diphtheria and the like – one disease actually became a fashion sensation.

Tuberculosis, also known as the ‘White Plague’, killed hundreds of thousands in Paris and other French cities over the century, transmitted by coughs and sneezing.

The lingering, drawn-out course of the disease in people, leading to pale, drawn features, led to some considered Tuberculosis, also known as ‘consumption’, something to aspire.to.

It was seen as a romantic illness, appearing in the popular consciousness through works such as Puccini’s La Bohème. The image of the sick young woman putting her life to rights before experiencing a ‘beautiful death’ has resonated to this day.

This perception even persisted into the 20th century, even after the bacteria responsible for Tuberculosis was identified. To this day, 5,000 people in France continue to contract the disease although it is fully treatable if caught early.

While the ‘Spanish Flu’ of 1918-19 was first tracked in soldiers based at Fort Riley, Kansas, and thought to originate somewhere in Asia, the horrific, unhygienic conditions of France’s Western Front during World War I are thought to have greatly contributed to incubating and bringing the disease to millions.

Weakened immune systems, mass movement of troops and little disease controls meant that soldiers shipped home from battle took the disease with them.

France was severely hit by the Influenza outbreak. It is thought that 400,000 of the 17 million that died came from France, despite the best efforts of public health officials to contain the virus and introduce precautionary measures.

It is interesting to note that a not insignificant portion of these people may have died of rapid-onset secondary bacterial infections, or from untested medications alongside those whom the virus claimed. While it’s easy to fall into doomsday prognostication, in the 21st century advances in microbiology and virology, as well as an understanding of how disease spreads, means that it would be extremely difficult for a plague to rage as widely and wildly as the Black Death – at least at the same level of lethality.

Measures such as self-quarantine, banning of large-scale events and school closures will have an impact in slowing the spread of COVID-19 cronavirus.

Small changes to routine, such as more frequent hand-washing and coughing into your elbow, also mean that diseases will not be able to spread as quickly. As French authorities have maintained thus far – with a few simple precautions, we improve everyone’s chances for a long and healthy life.

In fact, the government has even created a little video to help you remember their health advice – not an option during the Black Death, unfortunately.