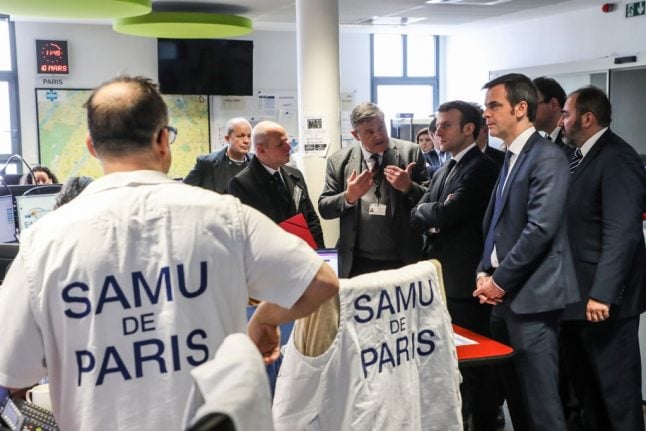 Nearly 1,800 people in France have been confirmed as having the illness so far and 33 people have died, according to the latest numbers released by French health authorities on Tuesday evening.

You can keep up with our latest coronavirus coverage here

French authorities have been clear since the outbreak first began in Italy that France will enter a state of full epidemic, and have concentrated their efforts on delaying the peak of the spread of the virus.

Health Director Jérôme Salomon reminded the country that, despite the rising death toll, in most cases the virus manifested itself through milder symptoms similar to those of a cold or a flu.

READ ALSO What to expect if France declares a coronavirus epidemic Overall the World Health Organisation has said that 80 percent of people who get the virus will experience mild symptoms, while 15 percent will develop problems such as pneumonia which may require hospital treatment. Five percent of cases are considered critical.

This is largely corresponding to the pattern that France has seen so far, with 80 to 85 percent of the cases experiencing only mild symptoms.

The world death rate has been listed as around 3.5 percent while in France so far the death rate was at 1.85 percent, although both figures have caveats that the situation is still developing and, in regards to France's figures, are taken from a statistically small data sample.

Elderly people and those with underlying health conditions have made up the majority of the deaths so far, both in France and around the world.

Jérome Salomon, Director General of Health in France, reiterated on Tuesday evening that those who have died in France were mostly elderly with serious underlying medical conditions.

Nineteen of the people who have died were men and 14 women.

Twenty-three of the 33 people who have died from the virus were more than 75 years old and all of them suffered from serious underlying health issues before catching the virus, Salomon said.

Four were between 64 and 75 years old. Five of the deaths were people younger than 64 years old, but they all suffered from serious illnesses before they got the virus, according the Health Director.

One of those was a 38-year-old in eastern France.

There has been some confusion in France as to which groups are particularly vulnerable to the virus. After it was reported that asthmatics and people with similar breathing problems had a death rate that was 6.3 percent higher than the rest of the population, health personnel said people were calling in panic for advice on what to do if they catch the virus.

However people with asthma or diabetes were not the ones most threatened by the virus, said a patient association for people in France suffering chronic obstructive pulmonary disease (called BPCO). Last week BPCO lashed out against what they said were misconceptions about the coronavirus in France.

“Stop talking about old people, children (luckily few have been harmed), diabetics and people suffering from cardiovascular issues,” they wrote in a press statement.

“[The coronavirus] destroys you lungs, but it's not asthmatics who are in vital danger, it's the 700,000 BCPO patients in serious condition who no one is talking about.”

Salomon this week urged everybody to follow health advice in order to limit the spread and protect those most vulnerable to the illness.

“This is the time to protect our weakest,” Salomon said. “The elderly must benefit from the solidarity of the whole country.”

One of the latest deaths was the first on the island of Corsica – an 89-year-old man who died in hospital in Ajaccio. Corsica had not reported any cases for most of last week, but with 38 cases now reported in the Ajaccio area it is being considered a cluster zone.

The total number of cluster zones in France have now reached nine.

Since the death toll passed a certain number, there has naturally been less details released about each victim and their health status. We know more about the first victims of the virus and you can read about them here:

The first death announced was that of an 81-year-old Chinese tourist who had travelled to Paris. He was hospitalised on January 25th with a fever, tested positive for coronavirus and died on February 14th. His daughter, 50, who had travelled with him also contracted the virus but recovered.

The first wave of cases in France were all connected to travel to China, but the second wave began after a major outbreak in neighbouring Italy. The first death in the second wave was a 60-year-old technology teacher from the Oise département in north east France. The man, who was transferred to the specialist Pitié Sâlpetière hospital in Paris where he died, had not travelled to either China or Italy and how he contracted the virus remains a mystery. His local paper reported that he died of a pulmonary embolism.

An 89-year-old woman also in Oise was the next victim. The woman, described as “very popular” and involved in many community activities in her hometown of Crépy-en-Valois had been suffering from a serious underlying medical condition, said health authorities. She was admitted to hospital in Compiègne and post-mortem tests established that she had coronavirus.

The next case was from Brittany, where a 92-year-old man from the Morbihan département was admitted to hospital in Vannes in a serious condition and died the next day.

The next victim was also from Crépy-en-Valois in Oise. The 73-year-old man, who had been on dialysis due to kidney failure, was diagnosed with coronavirus on February 29th after suffering severe respiratory problems and died four days later.

The next death reported was that of a 63-year-old man in the neighbouring Aisne département. Health authorities believe that he had contracted the virus through contact with one of the patients in Crépy-en-Valois. He was hospitalised in Soissons on February 29th and died five days later.

The seventh case was again in Crépy-en-Valois, a 79-year-old man who lived in a retirement home and had been hospitalised since February 28th with severe respiratory symptoms.

The French government's advice is that the majority of the population can continue their daily lives, taking these basic health precautions.

In some of the départements of France where 'clusters' of patients have been identified all public gatherings have been banned and schools closed.

In the rest of the country gatherings of more than 1,000 people have been banned, but for the most part life continues as normal.

People have been advised to stop shaking hands or kissing during the outbreak in order to slow down the spread of the illness.