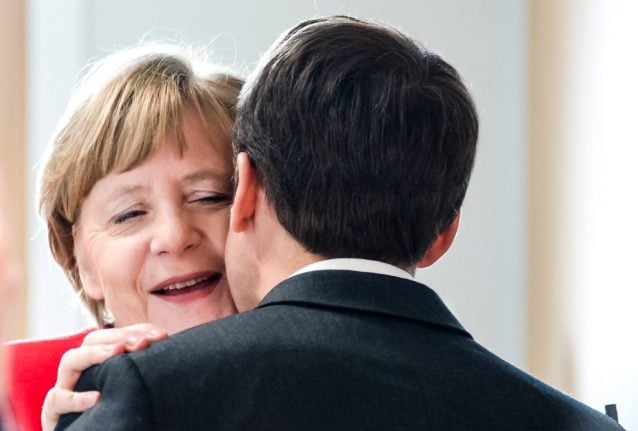 One week has passed since the French health minister Olivier Véran pulled the rug out from underneath the feet of the entire French population by saying people should not longer do la bise, the distinctive French double (or treble) cheek kiss used when greeting people.

In order to try and slow the spread of coronavirus, French people have been asked to stop shaking hands and kissing when they greet each other.

You can follow our coverage of the latest on the coronavirus situation in France here.

you guys it’s officially a health emergency bc the French have been advised to stop la bise !!!! pic.twitter.com/Y82Hu3Yp0u

Because la bise is so firmly ingrained in French culture, some people found it a bit difficult to know how to act post-bise.

“I've hear a lot of people complaining that they don't know what to do,” said Francis, an American from New York who has lived for 54 years in France. She said she thought la bise was “a very nice thing in the French culture.”

“It's friendly affectionate, but not too intimate,” she said.

READ ALSO: La bise – who to kiss in France, how often and on which cheek?

“I don't really mind, but a lot of people find it really bad,” Francis said.

The past week, French newspapers have been filled with advice on alternative ways of greeting each other.

A France Inter article called 10 ways to say hello without doing la bise or shaking hands listed the “Ebola handshake” (bumping elbows), the “footshake” or even a “namasté” as alternative ways of greeting someone.

Nouvel Obs simply asked: “What shall we do now?”

“Say hello by a sign with the hand? Do a “footshake” or a “fist bump” like Barak Obama? A “Thai way?”

Etiquette expert Philippe Lichtfus, who has been widely cited in the media, explained to readers of daily Le Parisien how to do a proper handshake (although handshakes were blacklisted too by the health minister).

“It’s important to stand straight in front of the other person and not side on,” Lichtfus said, explaining that it is also possible “to greet each other without touching,” by simply “looking into a person's eyes.”

“By facing each other, making eye contact, and, importantly, wearing an ‘open’ facial expression,” Lichtfus said. Former presidents Jacques Chirac and George Bush stuck to a handshake, but can you spot the difference in their attitudes? Photo: AFP

A despairing France trying to cope with quitting la bise cold turkey quickly turned into a national joke, with journalists poking fun at politicians who had said they would now stop doing la bise.

“France, the nation that loves body-contact, with people who stink and exchange slobbery kisses, has been reduced to just a shadow of its former self,” joked a France Inter radio journalist earlier this week, sarcastically recalling Paris Mayor Anne Hidalgo saying how much she “loved doing la bise,” and was “really sorry” that she now would have to stop kissing people during her re-election campaign.

One of Hidalgo's main rivals, former health minister Agnès Buzyn, was also ridiculed for having told BFMTV that Parisians would probably “elbow bump” each other instead of kissing “within a week.”

When you arrive au boulot et que no one wants to do la bise anymore pic.twitter.com/ptrTQ8HbGx

But some French people said they had indeed resorted to an elbow bump to compensate for the lacking bise.

“If it's people I don't know, I just nod my head. I prefer it, I don't really like shaking hands or doing la bise because of the bacteria.” Kissing a police officer on the cheek would perhaps not be accepted in all countries, but France is not like everywhere else. Photo: AFP

READ ALSO: Bretons fight for the right to give just one greeting kiss

Elise, 33, said la bise was something she only did with people “you don't see every day.” She had stopped initiating la bise following the health minister's coronavirus advise.

“But if someone offers I won't turn them down. I don't really see how you could transmit anything just by touching each other's cheek,” she said.

“Unless you're really coughing on the other person, but frankly that never happens.”

“But I don't shake hands. And I use hand sanitiser more than before.” As Prime Minister of the UK, Theresa May had to do la bise when meeting her French counterpart, Emmanuel Macron. It was not a French tradition that she seemed to want to import to Britain. Photo: AFP

She had stopped shaking people's hand and doing la bise because “they told us not to as a safety measure.”

“I don't know where la bise comes from, it's just the way it is. The way it always has been,” she said.

“My son will do la bise with his male friends. That's something that seems to have changed from one generation to the next.”

“When I was young, men used to shake hands instead of kissing.”

READ ALSO The everyday precautions you can take against coronavirus

And in general it seems that the French are pretty obedient to the new rules.

Simon, 28, was the only person The Local spoke to who said he had not stopped doing la bise.

“We hear so much about the coronavirus, but I don't really feel like it's that exceptional,” he said.

Simon said he would do la bise with friends (male and female), but not strangers.

“That's just the way it is in France,” he said.

“I guess it's more symbolic than shaking hands.”