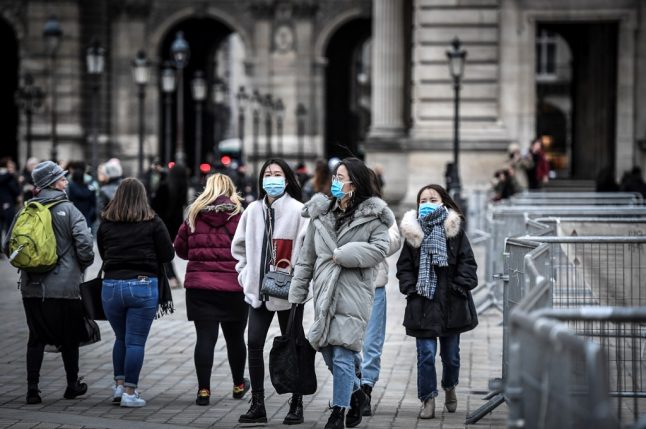 It's not unusual at times of public health fears for people to revert to old wives' tales and their grandmother's advice in order to try and stay healthy, but some of the 'remedies' being debunked in France are frankly bizarre.

French authorities have now stepped up precautions with the news that there are 191 confirmed cases in France spread over 12 of the country's 18 regions.

Gatherings of more than 5,000 people in enclosed spaces have been banned, while in the départements of Oise and Haute-Savoie all public gatherings – including markets and Sunday Mass – have been cancelled and schools in nine towns have closed down.

For the latest of the health situation in France, click here.

But in times of crisis false information and psychose (hysteria) can be as dangerous as the illness itself.

So what won't protect you from coronavirus?

Wearing a mask – people wearing surgical masks is becoming an increasingly common sight, especially on public transport, but the government warns that the type of mask available over the counter in pharmacies and online do not protect against the virus.

Only people who may have symptoms or who are self-isolating are advised to wear one and the government is asking people not to panic-buy masks, as this can lead to shortages for people who need them.

Shaving – A graphic relating to facial hair styles and masks has been widely shared on social media, leading many to conclude that all men should shave their beards off to avoid ineffective masks. As discussed above, the majority of people do not need to be wearing masks anyway, and the graphic is an old one that relates to the wearing of protective masks in laboratory conditions.

Garlic – There are lots of good reasons to eat garlic – it's delicious and a staple of many classic French dishes – but although it does have antioxidant properties it won't specifically protect you against coronavirus. Attempting to eat a healthy, balanced diet with plenty of fruit and vegetables is of course good advice all year round.

Children's urine – Bit of a bizarre one this, but apparently some people do believe it. So much so that French newspaper Le Parisien in a Q&A article felt the need to tell its readers that: “To put an end to preconceived ideas, the World Health Organisation informs that no, washing hands or rubbing surfaces with a child's urine does not protect against the new virus.” Plus, that is a disgusting idea.

READ ALSO The everyday precautions you can take against coronavirus

And what will protect you?

Hand-washing – This is the number one message that the government is pushing. Everybody should be washing their hands throroughly and regularly, particularly before eating and after coughing or sneezing or touching surfaces that other people have touched (handles, elevator buttons, Metro poles, money). Hand sanitsier gels are also advised as an extra, but are not as effective as correctly washing your hands.

Use disposable tissues – If you are coughing, sneezing or blowing your nose do not use a reusable fabric handkerchief in which germs can live, instead use a disposable tissue and properly dispose of it after use.

Clean off surfaces – Surfaces especially in shared areas such as office desks or shared kitchen should be regularly wiped down with alcohol- or chlorine-based disinfectants.

The government has also set up a free coronavirus information line – call 0800 130 000 for non medical queries.

Should you stay indoors and avoid work or school?

The government is currently advising that only people who have recently returned from China (including Hong Kong and Macau), Singapore, South Korea, Iran or the Lombardy, Emilia-Romagne or Veneto regions of Italy need to self isolate.

For more on self isolation and who needs to be doing it, click here.

Schools in nine communes in areas particularly badly affected are closed, but all others remain open at this stage.

The French government has banned all gatherings of more than 5,000 people in enclosed areas, and in the two worst-affected départements – Oise and Haute-Savoie – all public gatherings including markets and Sunday Mass have been halted.

There is also advice that non-essential travel, particularly outside the EU, should be avoided.

For people who do not fit the self isolation criteria there is no advice to stay home, simply follow the health and hygiene practices outlined above.