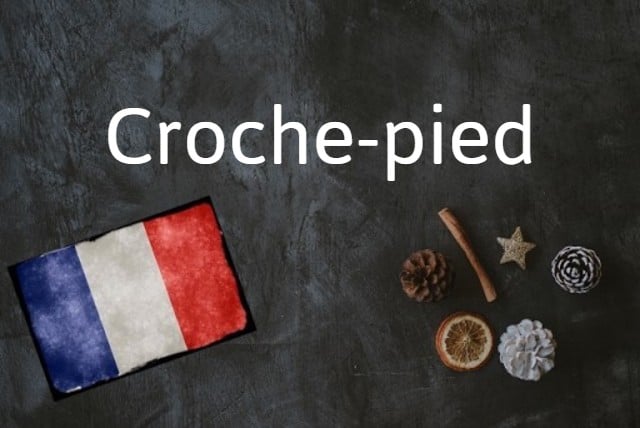 Why do I need to know croche-pied?

Croche-pied is an expression you will need when watching a football or basketball game with French friends (and is was also the recent source of a huge controversy in France).

Croche-pied means tripping someone over, usually by sticking out your own leg.

It's perhaps best translated to ‘hook-foot’ (which, you must admit, is a canny way of saying 'trip over' someone).

If you're an outraged football fan who thinks the referee should have called what you deem to be a huge foul, you might shout:

Non, mais il y a faute là ! Il est aveugle ou quoi, l'arbitre ? On lui a fait un gros croche-pied! – What, that was such a huge foul! Is the referee blind or what? He was tripped over on purpose!

If you accidentally tripped someone over, you may excuse yourself like this:

So we've established that croche-pied is a fun expression, but its synonyms are just as fun:

Croche-patte – refers to the same act, but patte means 'paw' and not 'foot'

Jambette – from jambe ('leg'), making someone fall over by using your leg.

Croc-en-jambe – also means the same. Croc refers to a hook.

This particular croche-pied by a police officer sparked a storm of criticism:

The video, published mid January, showed a police officer in Toulouse tripping over a female protester.

It sparked Interior Minister Christophe Castaner to make a rare public criticism of the country's police officers, saying that “on ne fait pas croche-pied a la justice” – 'you don't trip over justice'.

In this sense, croche-pied referred to both the act of tripping the woman over, and the police officer's negligence of his public duty.