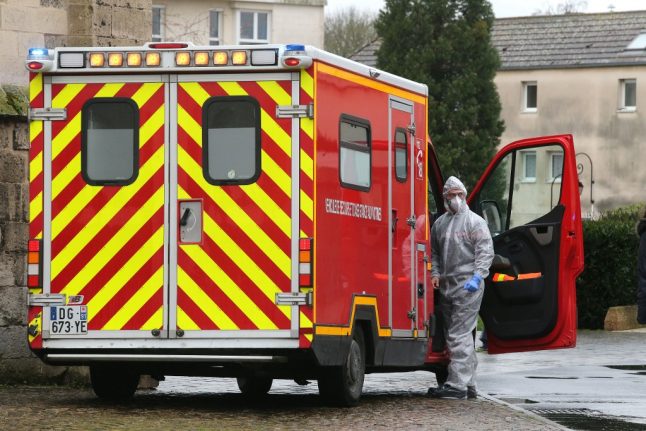 We have chosen to make this article completely free for everyone. Please support our coverage by considering joining as a member. Scroll to the bottom for more information.

What's the latest situation in France?

France has essentially had two waves of coronavirus so far. The first was in late January and early February when a total of 12 cases were confirmed – all people who had either travelled to China or been in close contact with someone who had (including one French healthworker).

Read the latest updates on the situation in France here.

Of these 12, 11 made a full recovery and have since been discharged from hospital while the 12th person – an 80-year-old Chinese tourist – died.

There was then a pause of almost two weeks with no new cases reported, and then a major outbreak began over the border in Italy on the weekend of February 22nd.

From then on authorities knew it was only a matter of time before cases started spreading to France – not only do the two countries share a land border but the outbreak in Italy coincided with the February school holiday in France. Italy has long been a popular destination for both French families and school trips, so there have been a lot of people travelling from France to Italy and back.

The number of confirmed cases now stands at over 1,000 and the death toll stands at 21 – the majority people who were elderly or who had underlying health conditions.

Where are the cases in France?

READ ALSO: MAP – The regions of France most affected by coronavirus?

The highest number of cases are concentrated in clusters in the Oise département in north east France, Haut-Savoie near the Swiss border, Morbihan in Brittany and Haut-Rhin in the east, but there are other cases throughout France. How serious are they?

How ill people get with coronavirus varies, but the World Health Organisation says that 80 percent of people who get it have only mild symptoms – comparable to getting a bad cold or the flu.

The majority of the people who have died so far around the world are people who are elderly or who have underlying health conditions or both. The virus does not appear to affect children any more severely than the rest of the population.

It's early days yet and some countries have been more rigorous at testing than others, but the World Health Organisation is saying that current data shows a roughly 3.5 percent mortality rate for coronavirus while France's mortality rate so far is around 1.7 percent.

What impact has it had in France?

Given the relatively low infection rate so far, it's probably more likely that it's the knock-on effects of coronavius – such as events being cancelled and travel disruption – that will directly affect your life.

All events involving more than 1,000 people are cancelled.

Major events cancelled or postponed so far include the Paris Marathon, Paris half marathon, France v Ireland Six Nations rugby match and Annecy and Nice carnivals along with scores of concerts and smaller events.

The Louvre closed over staff safety fears but is nor reopened – albeit with a restriction to pre-booked tickets only.

In the Oise, Haut-Savoie, Morbihan and Haut-Rhin départements which are particularly badly affected all public gatherings including markets and Sunday Mass were banned, and these measures could be spread to other areas.

All schools in Oise and Haut-Rhin are closed.

So far the travel disruption has been fairly minimal, France has not closed its border, saying that to do so would not help stop the spread of the virus, but several airlines have stopped flying to China.

British Airways has announced the cancellation of some of its routes to France due to falling demand but the transport minister said there was “no question” of stopping trains from running. Air France and French rail operator SNCF are offering free cancellations or alterations to pre-booked tickets during the outbreak.

The French government advises against all non-essential travel outside the EU.

At present France has no lockdown zones or curfews of the type seen in Italy, but the country's existing pandemic plans contain provisions for these type of precaution and the health minister said they could be used if the number of cases rise.

Should you cancel your trip to France?

Some readers have been asking us whether there are any risks related to coming to France amid the outbreak of coronavirus.

All we can say is that in the vast majority of the country life goes on as normal. In the hot spots mentioned above (Oise, Morbihan and Haute-Savoie) there is an impact on daily life in certain parts of those départements with schools closed, gatherings banned and markets and church masses cancelled.

Transport around the country is currently not affected although some airlines have chosen to cancel some flights to France, but that was due to falling demand.

At this stage there is no quarantines or curfews in place.

READ MORE: Do I need to cancel my trip to France over coronavirus?

What is forecast to happen next?

French authorities have been clear ever since the outbreak in Italy that they too are expecting an epidemic and have been preparing for this.

Health chief Jérôme Salomon has said France's strategy was to try to prevent or at least slow down the spread of the virus throughout France.

READ ALSO: What to expect if France declares an official coronavirus epeidemic

But he added on that people who do not need to self isolate should “continue life as normal” public transport will continue to run as normal, he added.

“Despite the emerging nature of this new virus, the state and the health services are completely mobilised to face up to this changing situation,” said Salomon on Monday.

France is currently in 'stage 2' or the pre-epidemic stage, but politicians have said for some days that a full epidemic is probably only a matter of time.

We look at exactly what that means here (and why it's less scary than it sounds).

It's also worth pointing out that France has officially been at epidemic status for seasonal flu since the beginning of February – and probably very few people noticed.

The epidemic designation refers to how many people, per 100,000 of the population, catch the illness, not how serious it is.

Since the start of flu season in November thousands of people who got ill, hundreds have been hospitalised with severe symptoms and 72 people have died.

How can I stay safe?

There is as yet no vaccine for coronavirus so French officials are advising people to practice good basic hygiene to keep themselves protected.

READ ALSO Coronavirus – what are the rules around self isolation and quarantine? Should I be in quarantine?

The government advised that anyone who has recently returned from China (including Hong Kong and Macau), South Korea, Iran or the Lombardy, Emilia-Romagna or Veneto regions of Italy should self isolate for 14 days.

This means you should;

Anyone who is self-isloating or whose children cannot go to school because of self-isolation is entitled to up to 20 days of paid leave from work.

READ ALSO What are the rules on quarantine and self isolation in France?

Hi,
The Local's mission is to give our readers all the information they need about what's happening in France. We rely on paying members to do that, but we have chosen not to put any of our articles about the coronavirus behind our hard paywall, to help keep all of our readers informed. We believe it is the right thing to do at this time.
This means that new or occasional readers can read articles for free. On urgent need-to-know articles and official advice about coronavirus, we are also dropping the paywall completely. That includes this article.
We have received many comments from supportive readers asking how can they contribute. The best way is simply to sign up as a member. You can do that in just a few moments by clicking HERE.
We hope our paying members understand why we have chosen to make these articles about the coronavirus free for everyone, but if you have any questions, please let me know.
As for the coronavirus, you can read all our articles here.
Kind regards,
Emma,
Editor, The Local France