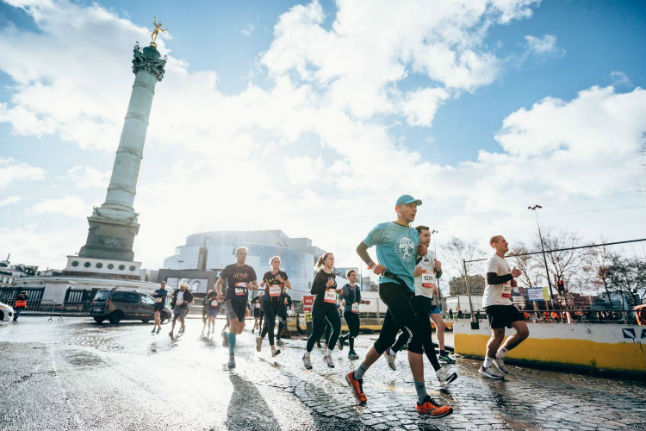 The race was due to take place on Sunday. Photo: Harmonie Mutuelle Semi de Paris
The announcement came after the French government ordered the cancellation of “gatherings of more than 5,000 people” in enclosed areas as well as some external events.
As of 6pm on Saturday, the Director General said that France had 100 confirmed cases, nine of which are patients in a serious condition.
French Health Minister Olivier Veran said the cancellations of external events would affect gatherings in open areas where there would be “intermingling with populations from areas affected by the virus”.
READ ALSO Coronavirus: The everyday precautions you can take to stay safe in France
In a statement on Twitter, the race's organisers said that it had agreed with city authorities to hold the race at an future date, which it said it would announce as soon as possible.

Also cancelled was the final day of the Paris Salon de l'Agriculture – which attracts people from all over France – and the Annecy carnival. Organisers of the Nice carnival had already decided not to stage the final day on Sunday.
The weekend programme of French Ligue 1 football matches is unaffected and will go ahead as planned – although the players will not shake hands in line with the latest health advice.
Extra measures have also been put in place in six communes in the two départements most affected by the virus – Oise and Haute-Savoie. In those areas all large gatherings have been banned – including Sunday Mass – and residents advised to limit their journeys to essential movement only.
Since the start of the outbreak in France on January 24th, two people have died, a 60-year-old French teacher and an 80-year-old Chinese tourist.
Of the 12 people who contracted the virus in the first waved, 11 made a complete recovery and have been released from hospital.
The 88 other cases have all been reported since Tuesday.
Véran added: “We are now moving to stage two. The virus is circulating in our country and we must stop its spread.”

France has launched a special hotline number so worried members of the public can seek help and advice that is manned 24/7.

The number is 0800 130 000. The emergency number 15 should only be used if the a member of the public believes they are suffering from a medical condition linked to coronavirus.

The official total of 73 includes 11 who fully recovered from the virus earlier this month and 2 fatalities, one a 60-year-old teacher from northern France the other an elderly Chinese tourist.

In Paris a major trade event which usually attracts thousands of people from around the world has been cancelled because of coronavirus fears.

The JEC World Leading International Composites Show had been scheduled to start on May 12th.

In France authorities are asking people who think they may have coronavirus symptoms not to go to hospital or their doctor's surgery – instead they should call an ambulance and tell the operator it is a suspected case of coronavirus. The ambulance number in France is 15.