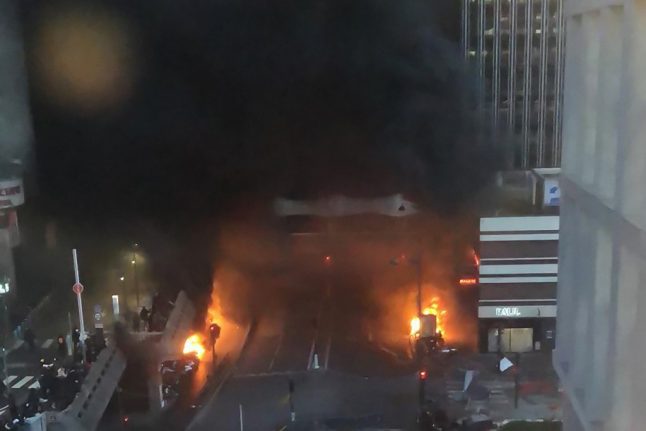 The blaze sent a huge plume of thick black smoke into the sky over central Paris, as police warned the pubic to avoid the area.

“Avoid the area and allow the emergency services to intervene,” the police tweeted a little after 6pm on Friday.

The SCNF train service operator said the underground section of the Gare de Lyon was evacuated as a precautionary measure. Train traffic was severely disrupted.

According to the capital's main daily Le Parisien, the fire erupted during a protest against the Congolese star Fally Ipupa, who was to hold a concert on Friday evening in AccorHotels Arena, in Bercy, east in the capital.

Police said it had intervened to stop protesters who set alight garbage bins and scooters, releasing a thick, black smoke cloud over the city centre.

Police tweeted that “scandalous behaviour from protesters” prevented the Paris fire brigade from accessing the fire, together with a video showing protesters clashing with firefighters.

Outside the station, AFP witnessed a dozen firetrucks at work amid the smouldering wrecks of about 30 vehicles, mainly scooters.

Police had banned any protests around the AccorHotels Arena in Paris, not far from the station, where Congolese artist Fally Ipupa was to give a concert.

Congolese expats regularly speak out against artists from home who perform in France or Belgium, accusing them of being close to former DR Congo president Joseph Kabila and his successor Felix Tshisekedi.

A 2017 concert by Ipupa was cancelled by police citing risks for “serious disturbances to the public order”.