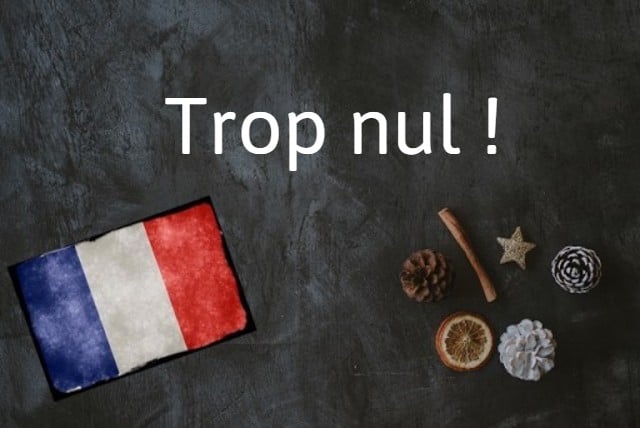 Why do I need to know nul?

It’s a great way to criticise something without specifying why exactly that thing should be criticised.

Nul means ‘zero’, but it’s also an expression meaning something is ‘bad’, ‘of poor quality’ or even ‘without value’.

You can also use it when you want to say that something or someone is ‘lame’ or simply ‘sucks’.

As you might have guessed already, the expression is particularly popular among French teens.

Just imagine a teenage girl screaming at her parents

You may use it about a thing:

You can also use it about yourself (nulle is the female version):

Honestly, anything can be described as nul. The weather, the food in the cafeteria at work, Parisians – you name it.

One very popular way of using nul is when reacting to someone telling you a story about something going wrong in their life.

It’s pretty great, actually, because it requires minimal brain power to understand and express why exactly that something 'sucks'.

(The 'oh' part is key, though, so remember to put a lot of emotion into it. No one appreciates a flat 'trop nul'.)

If you want other, more sophisticated ways of saying that something is nul, you could use:

Débile, con, idiot, incapable, incompétent, stupide – all to say that something or someone is ‘stupid’/’incompetent’

Ca craint (but this is very colloquial),  chiant (also colluqial), c’est ennuyeux or un cauchemar – for saying that something is ‘a pain’ or a nightmare.

Lamentable, inutile – for something that is 'pathetic' or ‘useless’

Glauque is another way of turning an idea down without further explanation.