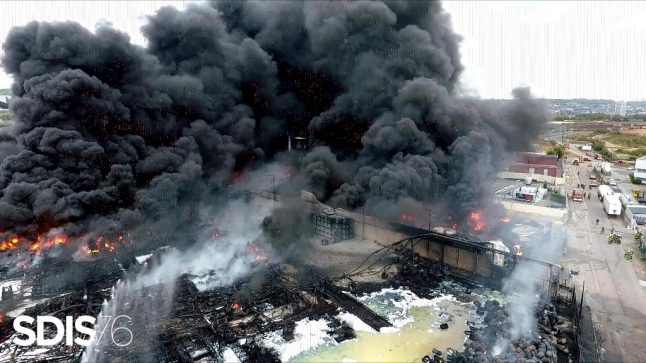 Lubrizol is owned by American billionaire Warren Buffett. Lubrizol France was charged with pollution and a failure to meet safety standards that resulted in “serious injury to health, security, or substantially degraded wildlife, flora, air, soil or water quality,” the Paris prosecutor's office said in a statement.

Lubrizol France was also ordered to pay a holding amount of €375,000 and further security of €4 million, “to guarantee the rights of victims by allowing for the repair of human and environmental damage that may have been caused”.

The amounts “correspond to the magnitude of the disaster,” said the statement, while adding investigators have not yet established the cause of the fire.

The fire at the toxic chemical plant broke out in the early hours of the morning in September after residents were woken by a series of explosions. The smoke reached Belgium and the Netherlands. Photo: AFP

The cloud of thick black smoke spewing out of the site of the Lubrizol factory reached as far as Belgium and the Netherlands, with soot deposits found in both countries, according to the Centre de crise de Wallonie (CRC-W).

After battling the blaze for 24 hours firefighters finally managed to bring it under control, but smoke and soot hung over the town and surrounding areas for days, with locals complaining of a noxious smell hanging over the town, causing headaches and nausea.

The soot also affected surrounding farmland and the sale of crops or animal products from 100 districts around Rouen was banned in the immediate aftermath of the blaze. Oily black soot was seen on crops in nearby fields after the blaze. Photo: AFP

Schools in the town and surrounding areas were also closed as a massive clean-up operation began.

It is not the first time that he factory – which was designated a Seveso site, meaning that there was a high risk from the chemicals it produced – had hit the headlines. In 2013 a gas leak from the same factory created a terrible smell that reached as far as England.