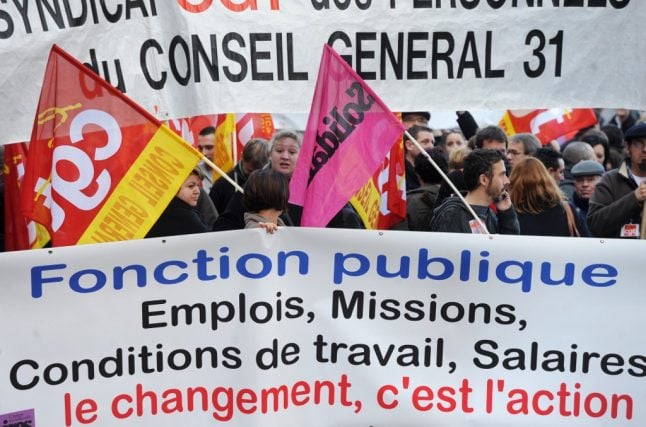 What is a fonctionnaire?

The word itself simply means public official or public servant, but has a wider application than in many other countries. While in Anglophone countries public official or civil servant is generally taken to mean ministry or local government employee, in France many more people are covered by the label.

But it's not just office workers, if you are employed by your local authority – whether you are a gardener, street cleaner or librarian – then you are a fonctionnaire.

But so are teachers, hospital employees and certain types of police officer, as well as customs and border control staff.

In total, roughly 17 percent of the French workforce is a fonctionnaire. Certain types of police officers including the police municipale are fonctionnaires. Photo: AFP

What are the benefits of becoming one?

Many types of fonctionnaire such as healthcare workers and police officers are performing a public service and giving something back to their communities.

But if you're looking for less altruistic reasons to consider the job, there are some of those too.

Many fonctionnaires are not particularly well paid, although those at the top of the tree in government ministries are not exactly on the breadline.

Comparison figures collected in 2017 by French national statistics body INSEE showed that the average fonctionnaire's net salary was €2,280 a month, very similar to the average private sector salary of €2,250, although this conceals a wide variation in salaries from top ministry officials to refuse collectors and healthcare assistants.

But what makes the job attractive to many is the benefits that go with it.

Most public sector employees have generous pension allowances (although that may be changing in the future if Emmanuel Macron gets his way) and sick pay.

France's famous 35 hour week is in reality largely limited to public sector employees and although most full time staff work more than 35 hours a week, they are entitled to claim back time in lieu known as RTT days, so in reality some get far more holiday than the statutory 25 days.

A study from 2017 found that the average fonctionnaire took 42 days holiday per year.

They also have impressive job security, with most employed on permanent contracts in contrast to the private sector where short-term contracts are common.

There's a cliché that says it's basically impossible to be sacked as a fonctionnaire, no matter what you do, but while that may have been true in the past, the rules have been tightened up somewhat in recent years. For example staff can be cut loose if they turn down three positions.

Talking of clichés, while public sector workers are often seen as the main strikers in France, certain types of fontionnaire are legally forbidden from striking. Holiday allowances can be quite generous. Photo: AFP

So how do you get the job?

Well it's not easy.

Obviously for certain roles such as health workers and teachers you need relevant qualifications. Workers from the EU can have their qualifications recognised in France, others may have to apply to take French tests or even retrain under the French system.

For those roles that don't need such specialist qualifications it is still not easy and there is stiff competition for roles.

All candidates for fonctionnaire roles must display dignity, impartiality, integrity and probity, according to the French government's public service section.

If you reckon that sounds like you, you then need to take an exam to enter public service before you can apply directly for some types of role.

You also – crucially – need to be a citizen of either France or a country in the EU or European Economic Area.

Some roles, particularly in the security sector or foreign ministry, are reserved for French nationals only.

What does this mean for British people?

British people are currently occupying something of a grey area – no longer citizens of the EU but keeping the majority of their current rights until December 31st 2020.

And in terms of being a fonctionnaire there is not a lot of clarity.

Back in 2019 when a no-deal Brexit threatened, France published a domestic ordonnance (decree) which, among many other things, addressed the issue of British fonctionnaires. Under that law, any British person who was already working as a fonctionnaire would be able to stay in post and their career development would not be affected.

Since the UK in fact exited the EU with a deal, that ordonnance has no legal force. We might assume that this points to France's likely intentions, but nothing is guaranteed and this is one of the may things that still needs to be addressed in French domestic legislation.

In terms of British people applying now for jobs as fonctionnaires, things are even less clear.

The Withdrawal Agreement, which governs the rights of British people living in France and lays out what happens between now and December 31st does not specifically mention fonctionnaires.

The basic principle of the Agreement is that all rights for British people – with the exception of voting or standing for office – remain unchanged until December 31st 2020 (or longer if the transition period is extended).

But Brits applying for fonctionnaire roles now may find that the uncertainty weighs against them.