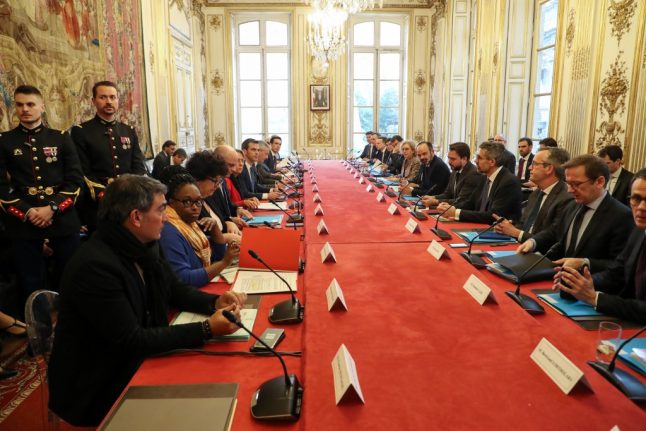 The French government has announced a long series of measures to counter a widespread coronavirus outbreak. Photo: AFP

With neighbouring Italy having confirmed more than 370 cases of the coronavirus, French Prime Minister Edouard Philippe convened an emergency meeting on Thursday morning to prepare for a similar scenario in France.

Where are we at?

So far, France has had 18 confirmed coronavirus cases in total. Six of these were discovered within 24 hours.

Two people have died of the virus. One of them, a French teacher, died on Wednesday morning. The man had been transferred from his hometown Creil to the Pitié Salpêtrière  hospital in Paris.

French President Emmanuel Macron visited Pitié Salpêtrière on Thursday morning, before leaving for Naples, Italy, for a crisis meeting with the Italian government.

The case has been particularly worrying to French health authorities as the 60-year-old had not been to any of the coronavirus infected zones. An investigation into how he was infected has been launched.

The other death was an 80-year-old Chinese tourist who died on February 14th.

Eleven people have been released from the hospital.

A 55-year-old man, one of the six new cases, is still in “serious condition” in Amiens.

What precautions is the government is taking?

One of the latest measures the government has taken is setting up a “green number” that people can call for any non-medical coronavirus-related questions. The line will be open all week from 8am until 9pm. The number is 0 800 130 000.

The operators will not be able to answer any questions of medical nature. On its website, the government advised anyone experiencing any signs of an infection “in the 14 days after returning from China, Hong Kong, Macao, Singapore, South Korea, Iran or the Italian regions affected by the virus” to call number 15 (the French emergency ambulance number).

Other precautionary measures include preparing 70 extra hospitals to receive coronavirus patients and tripling the resources for the country's testing programme.

The government has also placed orders for tens of millions of protective masks for health workers.

READ ALSO These are the extra coronavirus precautions France is taking Some of the supporters at a football game on Wednesday evening in Lyon were wearing protective masks. Photo: AFP

Some events have been canceled to avoid large gatherings of people.

Nice canceled its annual carnival on Saturday. Menton, a city on the Italian border, made the same decision for its Lemon Festival.

In Paris a major trade event which usually attracts thousands of people from around the world has been cancelled because of coronavirus fears.

They were also told to monitor their temperatures twice a day and watch for symptoms of respiratory infection (coughing or breathing difficulties).

READ ALSO: What are the rules around coronavirus self-isolating and quarantine in France?

Will not close border

The French government has remained adamant that it will not close down the border with Italy, shrugging off criticism from Marine Le Pen, leader of the far-right party Rassemblement National.

However closing down borders has been deemed an inefficient mesure by several health authorities. The Director of Global Health Institute at the University of Geneva, Antoine Flahault, said it would be “inefficient and illusory.”

“Not to mention that you can travel by land, sea and air, or go through Italy and Austria.”

The people who have died so far have generally been elderly or with underlying health conditions and the World Health Organisation says that 80 percent of people who get the virus will experience only mild symptoms.