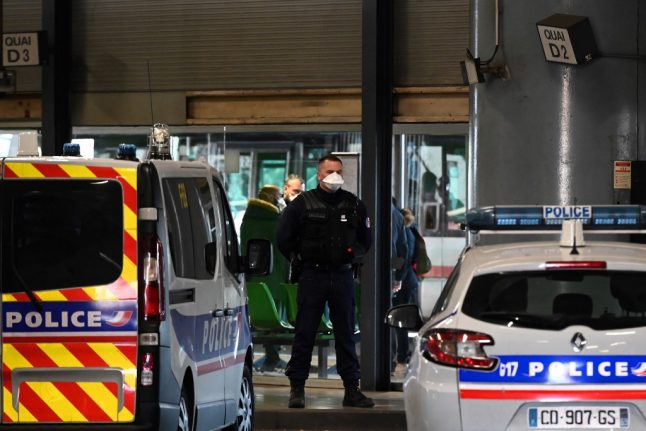 Police officers guarded the station in Lyon where a bus from Milan was due on Monday. Photo: AFP

French citizens returning from two Italian regions hit by a coronavirus outbreak were instructed to avoid “all non-essential outings” and keep their children home from school.

The Italian regions of Lombardy and Veneto were added Sunday, along with South Korea, to a list of places that are covered by a series of official health recommendations, including mainland China, Hong Kong, Macau and Singapore.

All returning travellers were asked to regularly monitor themselves for symptoms of the virus that has killed nearly 2,600 people worldwide.

The updated recommendations came amid growing global jitters over the spread of the virus. The World Health Organization chief said Monday the world should be working harder to contain the spread of the deadly new coronavirus, and should be preparing for a “potential pandemic”.

Tedros Adhanom Ghebreyesus said that so far, the WHO does not consider the outbreak that has killed more than 2,600 people a pandemic, but said countries should be “doing everything we can to prepare for a potential pandemic.”

French Health Minister Olivier Véran was heading off to Rome on Tuesday to attend a European strategy meeting of how to handle a crisis if it were to occur.

French media on Tuesday morning reported of a “growing fear” in the country following the surge in the contagion in neighbouring Italy.

On Monday, a bus that arrived in the French city of Lyon from Milan was confined for several hours over fears of a case of infection on board. The bus was stopped in Lyon. Photo: AFP

The LyonMag news site reported that a driver, who is Italian, was taken to hospital for tests because he had a bad cough. The passengers were kept on board for tests before being allowed to leave.

The bus, destined for the central city of Clermont-Ferrand, had stopped in the Italian city of Turin and Grenoble in France on the way to Lyon.

Milan is the capital of the Lombardy region, which is at the centre of Europe's biggest outbreak of the coronavirus.

Seven people have died from the disease in Italy, where several villages are under lockdown.

The figures below show the number of coronavirus cases per region in Italy, including deaths and those who have been cured. We will update the figured when we get new information.

Read more about the situation in Italy in the coverage by our Italian colleagues here.

In a further sign of the anxiety triggered by the spread of the disease, a Paris police station was closed to the public for several hours Monday after a Chinese woman became unwell on the premises.

The station in the 13th arrondissement, home to the French capital's Asian quarter, reopened after the woman tested negative for the COVID-19 virus, a police source told AFP.

In France, one person, an 80-year-old Chinese tourist, has died from the virus so far.

In total the country has reported 12 confirmed cases – one French healthworker, six people in Contamines-Montjoie and five people who had recently travelled from China.

On Tuesday morning the French Health Minister Olivier Véran said all coronavirus patients had been released from the hospital.

Most of the people who have died from the coronavirus were elderly people with existing health problems, as shown in the graphic made by French daily Le Parisien below.