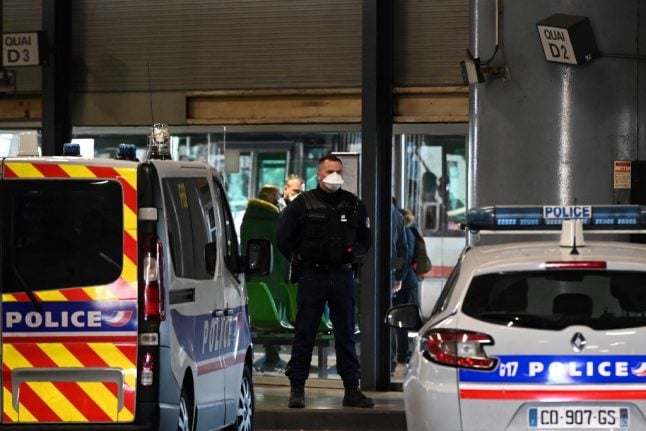 Police erected a security cordon around the bus at Lyon's Perrache station and ordered the passengers to remain onboard, a spokeswoman for the Lyon area's public security department said. The Flixbus bus had come from Milan to Lyon via Turin and Grenoble. Photo: AFP

No information was given as to how many people were on the bus.

The LyonMag news site reported that a driver, who is Italian, was taken to hospital for tests because he had a bad cough.

“A bus is undergoing an inspection. Our teams are at the scene and an assessment is underway,” a spokeswoman for the regional health agency told AFP.

A couple that boarded the bus in Lyon told AFP they were kept inside for over two hours before being allowed disembark after they were checked by doctors.

They said they were told they would be contacted again if the driver, who was taken to hospital for tests, turned out to be carrying the virus.

By around 1pm, all passengers – who were issued with face masks – had been allowed off the bus, an AFP reporter at the scene said.

Milan is the capital of the Lombardy region at the centre of Europe's biggest outbreak of the coronavirus that has killed nearly 2,600 people worldwide.

Low-cost operator FlixBus said the bus had stopped off in the Italian city of Turin and the French city of Grenoble on the way to Lyon.

Five people have died from the disease in Italy, where several northern villages are under lockdown.

In a sign of the nervousness triggered by the global spread of the virus, a Paris police station was closed to the public for several hours Monday after a Chinese woman became unwell on the premises.

The station in the 13th district, home to the French capital's Asian quarter, reopened after the woman tested negative for the COVID-19 virus, a police source told AFP.

The bus had come from Milan, capital of the Lombardy region which is at the centre of Europe's biggest outbreak of the coronavirus that has killed nearly 2,600 people worldwide.

Five people have died from the disease in Italy, where villages in Lombardy have been put under lockdown.