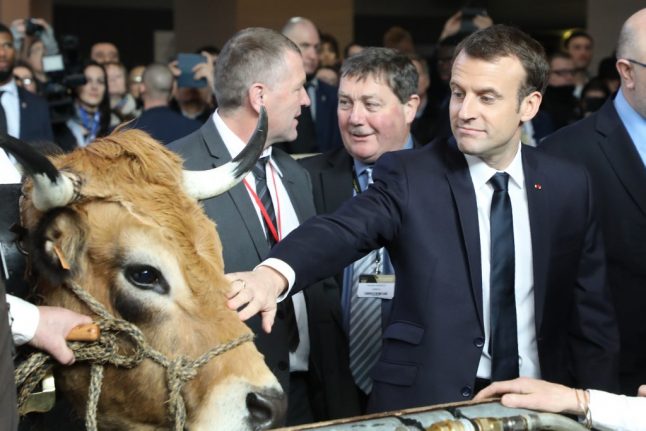 Every year, French city and countryside clash together in a slightly smelly feast to celebrate what rural France has to offer.

Farmers from all over France pick out their finest cattle and drive all the way into the capital to participate at the Salon d’agriculture (Agriculture fair), which is held in the centre of Paris, at Porte de Versailles.

After being curtailed in 2020 and cancelled in 2021, the show is back. This year it runs from Saturday, February 26th to Sunday, March 6th. A vaccine pass is required for entry, and all visitors aged six and over must wear a mask.

If you enjoy president-spotting (see below) Emmanuel Macron’s office has confirmed he will be visiting this year’s show on Saturday, February 26th.

In essence, the Agricultural Salon is a rare merging of French city and countryside.

For visitors, it’s an occasion to discover French farming, talk to farmers and see the products and animals up close

For farmers, it’s a rare get-together for a profession that is normally spread wide across the country.

It’s also a way to show off their products to Parisians and politicians, who usually see their finished products in the store and not up close. Macron has become an experienced cow petter after having attended the Salon years in a row. Photo: AFP

Politicians. As well as the highlight of the farming calendar, the Salon has also become a must-do event for politicians who nurse presidential ambitions.

This year’s event, less than two months before the presidential election, will likely see all the high-profile candidates attend. How important is visiting the Salon for a politician?

Pretty important, actually. The Salon has long been the scene of political campaigning, with presidential hopefuls battling over who seems the most at ease petting cows and pigs.

France is a country with vast rural areas that prides itself of its cheese, meat and wine – goods that it can thank its farmers for.

However, farming has become an increasingly tough profession. Not everyone can make it work. There were 460,000 French farms in 2019, compared to 750,000 two decades ago.

Farmers work long hours and many earn salaries that are far below the French minimum wage. Two out of five earn less than €4,320 a year. Ex-President Jacques Chirac was known and loved for being hands-on with everyone he interacted with on the ground. Cows were no exception. Photo: AFP

French politicians, on the other hand, tend to come from a certain privileged and urbanised background, with most of them educated in the same Paris-based elite universities.

This is the time where these same politicians get to show that they really care about the country’s farmers.

In 2019 Emmanuel Macron made sure to break the official record of a presidential visit at the Salon, spending more than 14 hours inside the fair. The previous record of 12 hours was sat in 2018 – by Macron.

How do I attend?

So if you want to scout high-rank politicians cuddling up to cows – or just want to take advantage of many free cheese samples on offer – the Salon is held at Place de la Porte de Versailles (15th arrondissement) in Paris.

Tickets are €15 (€8 for students) and can be purchased online (here). You will need to show a vaccine pass at the entry along with your ticket and wear a mask while inside.