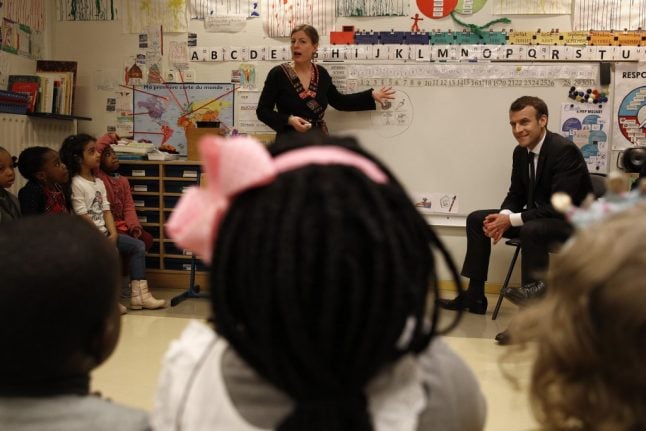 France is famous for many things, but its people's English-language skills is not one of them.

Compared to other European countries, young French people do poorly on English language tests. Many are embarrassed about their accents and will avoid speaking English if they can.

French President Emmanuel Macron and his government want to change this by improving the country’s English education. Over the past years French schools been told to reinforce their emphasis on English teaching.

But according to teachers The Local has spoken to, the problem is too big to be solved through the curriculums.

“Not all elementary teachers actually speak or understand [English] well enough to teach it,” said Vanessa, an American English teacher in Paris.

Vanessa taught as a English vacataire (stand-in) from maternelle (nursery) to lycée (high school). She gave birth 17 months ago and is currently between jobs.

In French primary school, children are supposed to be taught one foreign language for 20 minutes every day. (English is preferred, but not mandatory until the children turn 11.)

But the reality is very different from what was written on paper, Vanessa said.

“Schools don't always use the budget for good materials for language teaching,” she said.

“Not always but often it ends up being the same four lessons over and over again over the years.”

“Numbers, colours, food and animals. That kind of stuff.”

Vanessa said France suffers from a “quagmire of education reform.”

“Every new government tries to impress the voters by messing with éducation nationale,” she said.

“Somehow the reforms never bring what we really need like more money for schools, buildings, education materials, teachers and libraries.” Do French English teachers really have it that hard? Photo: AFP

Thomas, a French English teacher in the town Trappes, had similar experiences.

When asked about what it is like to be an English teacher in France, he sighed and said: “Honestly? Terrible.”

Only four years into his career, Thomas was on a long-term sick leave after suffering a burnout in his teaching position at his high school in Trappes.

Trappes is a socially challenged town in the Yvelines département, a Parisian suburb southwest of the capital.

But when it comes to English education, the problem runs deeper than his own school. The French education system as a whole makes English teaching a challenge, Thomas said.

“The threshold for what is expected of teachers is low.

“When I got my teacher’s accreditation, I was congratulated on my English fluency,” he said.

Puzzled by the comment, Thomas wondered whether ‘being fluent’ was not expected of French English teachers. Thomas was hired to teach high school students. But to his surprise the school soon asked him to teach BTS level students too (the two years following the Baccalaureat).

“I never expected that I would have to do that. They just told me I had to,” he said.

There was another problem that bothered him as well.

“The school system in France is all about perfection. If it’s not perfect, it’s not worth it,” he said.

Children would be reluctant to open their mouths, worried that they would be punished if they made a mistake.

“I am a language teacher, I am supposed to make them talk,” he said.

Because teachers were supposed to cover everything that is grammar related in collège (secondary/middle school), the students would be terrified of making mistakes when entering high school, he said.

“In theory, they aren’t supposed to have any grammar questions anymore,” he said.

But the theory was far from reality.

“Even the most serious kids, the most well-behaved and steady, are still lacking at least some aspects because teachers didn’t go over it long enough with them,” he said.

“I’ve never heard of any other country doing it this way.” But not everyone is convinced that an increased emphasis on English education is justified.

“I think we’re getting better and better at teaching languages,” said Francette Popineau, Co-General Secretary and spokesperson of the largest teacher's union FSU-Snuipp.

“Young teachers are getting much better at speaking English.”

“Of course, we need to ensure that their teaching methods are strong too. You can be very good at speaking a language and still be bad at teaching it,” she said.

“But this English hegemony bothers me a little bit.

“It’s a very practical language, but it’s not necessarily the language the children are speaking.”

Rather than pushing for a reinforced universal English training, Popineau believed the government should reinforce the languages children in France already spoke at home.

“It could be Chinese, Arabic or Spanish. No language should be set aside to make room for another,” she said.

“Besides, after Brexit, perhaps it’s time to ask ourselves to reconsider the place we are giving English in Europe.

“Is the European language really going to be that one of a country that is no longer there?”