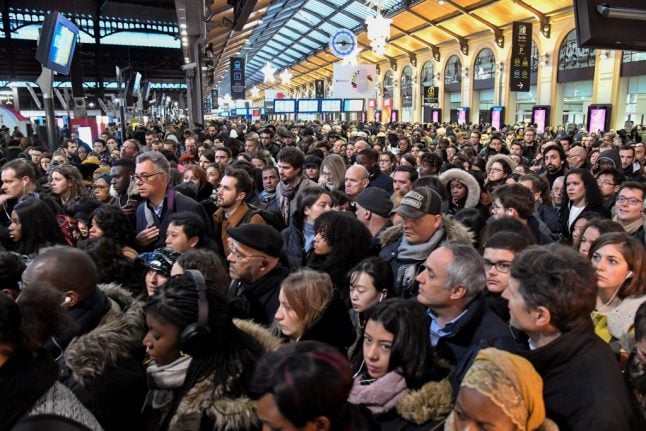 The European Railway Station Index was compiled by the Consumer Choice Centre, which also produces the annual European Consumer Airport Index – in which French airports have also done badly in recent years due to strike delays. This is the first year that the group has ranked railways stations and it has selected the 50 largest stations in Europe and scored them on issues including facilities, cleanliness, number of destinations available, accessibility and days affected by strike action.

The highest rated French station was Paris' Gare du Lyon in 13th position which scored well for accessibility, choice of destinations and cleanliness.

However its overall score was dragged down by the 118 days in 2019 when Paris stations were affected by strike action.

France was hit by several separate strike actions in 2019, the most serious being the mass transportation strikes that began on December 5th and in the first few days saw just 10 percent of trains running.

There was also a 'surprise strike' declared in a safety dispute and a strike by maintenance workers at a Paris depot which affected services to and from the capital.

The next highest ranking French station was Gare du Nord which with a massive 700,000 passengers per day was the second busiest station on the list – beaten only by another Paris station – Châtelet-les-Halles.

Gare du Nord has long suffered with an image problem – dubbed “the squalor pit of Europe” in 2014 by John Lewis boss Andy Street – it is also crowded, poorly lit, scruffy and plagued by pickpockets and is in fact due a major refurbishment.

The €600 million revamp is due to be finished in time for the Paris Olympics in 2024, but has sparked controversy for plans to include a giant shopping mall.

The Index scores it 100 percent for cleanliness, but says that its signage is confusing.

Languishing at the bottom of the table taking up the last four places between them were three station on Paris' Metro and RER public transport network – Haussman-Saint Lazare, Châtelet-les-Halles and, in last place, Magenta.

Famously enormous and confusing, Châtelet-les-Halles is the busiest station on the list, with a whopping 750,000 passengers a day passing through (179 million a year). It is served by both the Paris Metro and the suburban RER network, which links it to international stations such as Gare du Nord and Paris' Charles de Gaulle airport.

It is a major interchange for the Metro, with six lines converging, plus three RER lines, and crossing the sprawling underground complex to change lines can take up to 15 minutes.

It is built underneath a shopping centre, which many of the exits lead in to, leaving many a confused tourist making multiple laps of the shopping mall before managing to escape.

During the December mass transportation strikes Paris commuters filmed scenes of appalling crowding at the station as thousands of people attempted to access the few services still running.

The Index takes the largest stations in Europe by passenger volume, which means that none of France's provincial stations were rated. Magenta, Haussmann-Saint-Lazare and Chatelet-les-Halles stations are all on the RER network which, by dint of being run by SNCF, qualifies them as train stations.

The station in the top spot was London's St Pancras with a low number of strike days, high passenger convenience and international destinations.

The report authors added: “The fact that it also hosts the longest champagne bar in Europe did not influence this ranking.”

Zurich station came second while Germany had five stations in the top 10.

READ ALSO France facts: There has been a rail strike every year since 1947