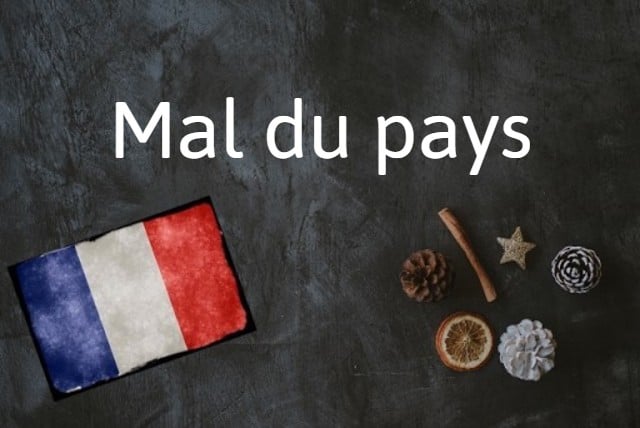 Why do I need to know mal du pays?

It's a canny way of expressing that you're missing your country of origin.

When translated word for word, mal du pays means 'pain of country' or just ‘country pain’, which actually is a pretty poetic description of what being homesick feels like.

Anyone living abroad will have felt that occasional sting of pain when thinking about something that reminds them of their country of origin.

Tu as mal du pays  – Are you feeling homesick?

But contrary to 'homesick', mal du pays actually gives word to that shot of pain that can come so abruptly following a smell, a sound or a gesture that reminds you of home.

A Brit living in any French city might have felt hit by mal du pays when thinking about the spicy curry place just around the corner of their former apartment, knowing that the Indian places in in France have tailored their spiciness level to their customers' sensitive taste buds (ie curries here are rather bland in comparison).

A US resident might feel a tingle of mal du pays after having run into a fellow Californian on holiday in Paris, a nostalgic reminder that small-talk with strangers is a little less enthusiastic in France.

And no delicious French pastry could prevent a Scandinavian from feeling a sting of mal du pays when imagining sinking their tongues into the sugar sprinkled crust of a Swedish signature cinnamon bun.