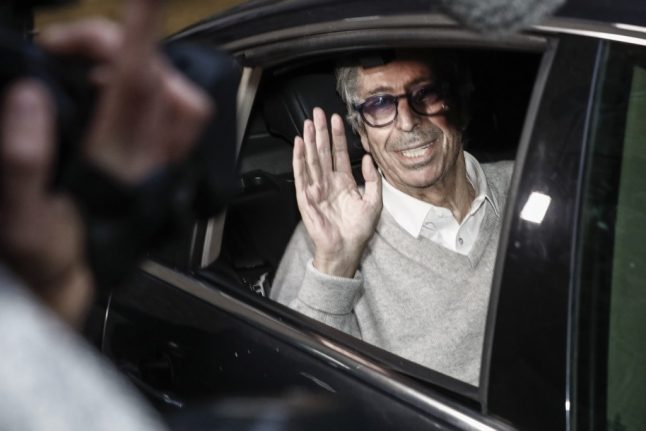 Patrick Balkany, 71, and his wife were found guilty of hiding millions of euros' worth of assets from the French taxman last year. Photo: AFP

Patrick Balkany, 71, was jailed in September last year, after he and his wife Isabelle were found guilty of fraud for hiding millions of euros' worth of assets from the French taxman.

READ ALSO Who are the Balkanys, the French political power couple mired in endless scandals?

The trial had captivated France, seen as a test of the ability of the courts to hold well-connected and long-established power players to account.

When in October the power couple was convicted of money laundering in a second trial, observers heralded the rulings as proof that French courts can hold the powerful to account.

Balkany was sentenced to four years in prison for tax fraud and five years for money laundering (only the first sentence would have been served in jail).

The sentence banned both of them from holding public office for a decade.

They have appealed the sentences, with rulings scheduled for March 4th and April 22nd.

Pending the outcome of these appeals, Balkany retained his mayoral title even in prison and his wife, who is deputy mayor, is acting on his behalf.

The Balkanys have dominated politics in the wealthy suburb of Levallois-Perret, just north of Paris, for decades. They are close friends of former president Nicolas Sarkozy, himself in the crosshairs of French prosecutors in a number of corruption cases. Isabelle Balkany, waiting for her husband to come home after five months in jail, said she was happy beyond words about the court' decision. Photo: AFP

Based on expert medical testimony, the Paris appeals court on Wednesday judged Balkany's health to be “hardly compatible with detention” and freed him under judicial supervision, with no requirement to pay bail.

A medical report had described a “deterioration” of the mayor's general state of health and a “marked state of depression” that it said was “not compatible with ordinary detention”.

According to his doctors, Balkany suffered from digestive problems, and his family said he had lost 30 kilos in five months.

“My happiness cannot be described,” Isabelle Balkany told journalists outside the prison shortly before her husband was released.

Judges had rejected several previous legal bids for his release by Balkany, except for one that granted him bail of €500,000 – an amount he was unable to pay.

Under Wednesday's ruling, he will be allowed to serve out his time at his home in Normandy in north west France.

He is not allowed to leave France, and must report to the police twice a month.