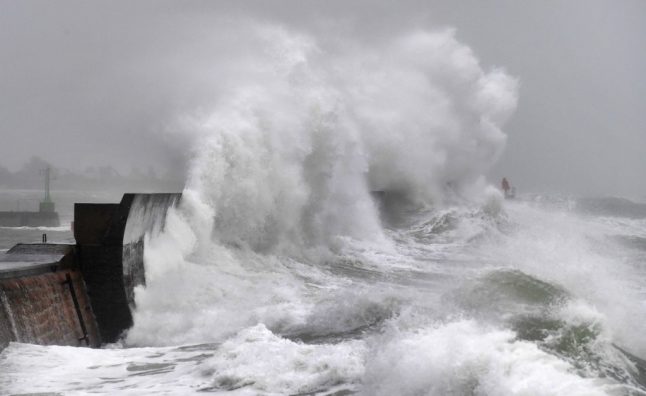 Ciara was heading through France on Monday with the electricity network company Enedis reporting outages from Brittany in the west to the centre and east.

Méteo-France reported wind speeds of 130 km/h along the coast.

Trees and electricity poles were blown over and roofs ripped off homes across 31 départments, fire and rescue services said.

130,000 homes are without electricity this Monday morning, according to Enedis. The regions most affected by the power cuts are Brittany, Normandy, Hauts-de-France, the Grand Est and the greater Paris Île-de-France region.

Emergency services in northern France reported “more than 400 interventions in connection with the storm”. The roofs of municipal police buildings in Caudry and a school in Le Quesnoy were damaged.

In Saint-Dié-des-Vosges (Vosges), part of a school roof was blown off.

In Wimereux in Pas-de-Calais a lifeboat had to be launched for several people who had gone surfing on Sunday. The lifeboat organisation condemned “irresponsible” behaviour.

In the Parc Montsouris (in the 14th arrondissement of Paris), the record for the night was 104km/h.

SNCF train traffic across northern France is expected to be severely disrupted this morning, and flights may also be affected.

In Paris although the metro was running largely as normal traffic on both the suburban RER services and the greater Paris Transilien network was badly disrupted and overnight several RER lines stopped running altogether due to the weather conditions.

Paris firefighters said they had received a “large number of calls” and appealed to people to limit their movements as far as possible and secure all belongings.

Anyone booked on a flight in or out of northern France was advised to check with their airline for delays.

Storm #Ciara: amber alert on Paris region. Drive carefully and stay alert while going to the #airport. Please check you flight schedule with your airline as delays may be expected.

Cross Channel ferry services were halted on Sunday but have resumed on Monday morning.

The storm is forecast to stay over France on Monday before moving east on Monday night. Throughout the day winds will gradually weaken in Paris and northern France, moving to the Vosges, Alps and Corsica – which is predicted to see winds of up to 200 km/h overnight into Tuesday.