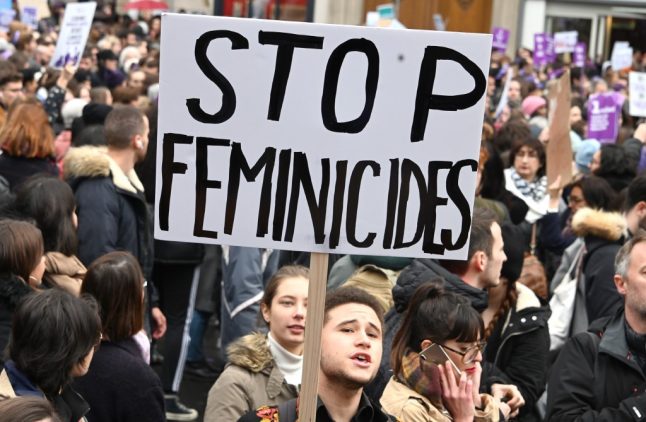 In 2019 at least 126 women in France were killed by current or former partners. Photo: AFP

On August 4, 2014, after a car chase through the northern town of Grande-Synthe, Isabelle Thomas, a mother of two, and her parents were gunned down by Patrick Lemoine, an auto-repair technician.

Two months later Lemoine, whom Thomas had met in 2012 after separating from her husband, committed suicide in prison.

A few weeks before the triple murder, Thomas had reported Lemoine to the police for domestic violence after he attempted to strangle her.

He was placed on probation and banned from contacting the 49-year-old maths teacher pending his trial, scheduled for mid-August.

But the harassment continued unabated.

“He followed her to her lawyer and shoved her lawyer who in turn called the prosecutor. Isabelle filed a complaint and the prosecutor was informed in person but nothing was done,” Isabelle Steyer, lawyer for the dead woman's sister Cathy Thomas, said.

The court case takes place against the backdrop of growing awareness and outrage in France over violence against women.

France among worst in Europe

France is one of the European countries with the highest number of such murders, according to EU figures from 2017, which put it second only to Germany.

In 2019, at least 126 women died at the hands of their current or former partner, by AFP's count – at least one woman every three days.

On November 23, nearly 50,000 people, mostly women, demonstrated in Paris over what they say is state inaction on the issue – one of the biggest marches against gender-based violence in French history.

Cathy Thomas argues that gross negligence on the part of the justice system led to the murder of her sister and parents.

Lemoine had followed Isabelle Thomas and her parents while they were on their way to the beach.

Steyer told Libération newspaper that Thomas had called the police from the car, warning “He's going to kill us” but that no officers were sent to investigate.

Her lawyer has called it a “textbook case” of “neglect at every level”.

The state has however denied any causal link between Lemoine's actions and the prosecutor's failure to react to Isabelle Thomas's complaint about Lemoine's breaches of his probation order.

“The allegations of gross negligence are in no way borne out” by the case, the state has argued in court documents seen by AFP.

While the French state has been accused before of criminal failure to protect women murdered by their boyfriends or husbands, it has rarely been found accountable for their deaths.

In 2014, the state was ordered to pay €132,000 to the relatives of a woman stabbed to death by a former partner against whom she had filed several criminal complaints.

“At a time when the fight against violence against women is a national priority, the culpable failure of the police to act was a missed opportunity to prevent the murder,” the court ruled in that case.

But in another case in 2015, the court cleared the state of responsibility over the killing of a woman by her former partner, a policeman, despite the failure of prosecutors to act on her complaints about his death threats.

In September, President Emmanuel Macron's government announced plans to create 1,000 new places in shelters for the victims of domestic violence.

Parliament in December also voted to introduce the wide-scale use of electronic bracelets to prevent domestic violence offenders approaching their victims.

Some feminist groups expressed disappointment however at the government's failure to commit large sums of money to fighting the scourge of violence.

READ ALSO Domestic violence: The 10 things France will do to stop women being murdered