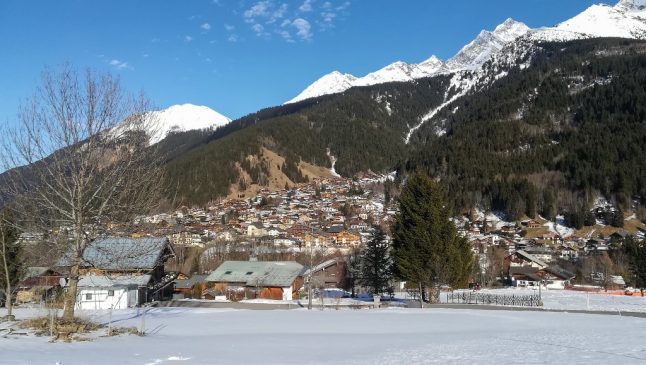 “Gather people into a hall… I'm not sure that's the best idea,” said Marie-Jeanne, who hires out ski equipment.

“It's all everyone is talking about,” she said of the outbreak. “The ski school already had some cancellations.”

News that five British nationals who stayed at the resort have been confirmed as infected could not have come at a worse time.

Saturday was first day of the winter break for schools in some parts of France, including the Paris region, with the rest of France breaking in the coming weeks.

“We've had a lot calls since this morning,” said Annick Roger, who runs the tourist office.

“There have already been some cancellations, people panicking a bit, wondering where the contaminated people could have gone. It's normal…”

Normally this time of year, the village of 1,200 people is invaded by thousands of tourists, visiting for the skiing at a resort that is part of the Mont Blanc chain, and just a few kilometres from the Italian border.

“Some tourists on the motorway are already turning around,” said Pascale Haye, who runs a supermarket. “It's a shame that this should fall now.” There is no visible sign of the hurried hospitalisation overnight Friday of 11 British nationals.

The alert was sounded after it was discovered that a man just returned from Singapore had passed on the virus to five people in his entourage, including a child, during their stay at the resort between January 24 and 28.

Another six members of the party were hospitalised as a precaution and were undergoing tests. The original carrier, meanwhile, was already back in Britain.

It was one of the clusters of the coronavirus outbreak that began in China and has since infected 34,500 and killed more than 700 people.

Some people the Alpine village could hardly believe the news.

“I have to travel to China for work and I put off my trip,” said holidaymaker Olivier Campion. And now, he said, the virus had come to join him on his ski holiday.

At the village chemists, Eric Paris said that although he had had a lot people asking for them, he was refusing to give out masks.

“That's 14 days now, the incubation period has passed,” he said. “If everybody is walking around with masks on, you imagine the hysteria?

“I checked with the regional health agencies, the town hall: there are no instructions. Everybody who should have been taken out of Contamines has been,” he added.

“Just because you have a sore back after a day's skiing doesn't mean you have the coronavirus.”

There are posters in the shops reminding people of the precautions to take, and a special number to call in case of need. And the village school, which the infected British child attended, will be closed next week for health checks.

At the Airelles restaurant, however, the staff are focussed on looking after their customers.

“The poor folk, they arrive from Paris and we don't want to spook them with that,” said the restaurant's owner, Delphine Wattablet.

In the village square meanwhile, Welshman Alun Price is on the last day of his holiday. “I'm almost happy to be going home,” he said.

“As if there weren’t enough problems with the English and Brexit!”

Catherine Marjou on the other hand, has just unpacked her bags. She only heard about the outbreak over the radio on the coach driving them there.

But Parisian tourist Laurent Geneslay was determined not to let it spoil his holiday.

He was even ready to wear a protection mask “if that means there are a few less people in the ski lifts!”.