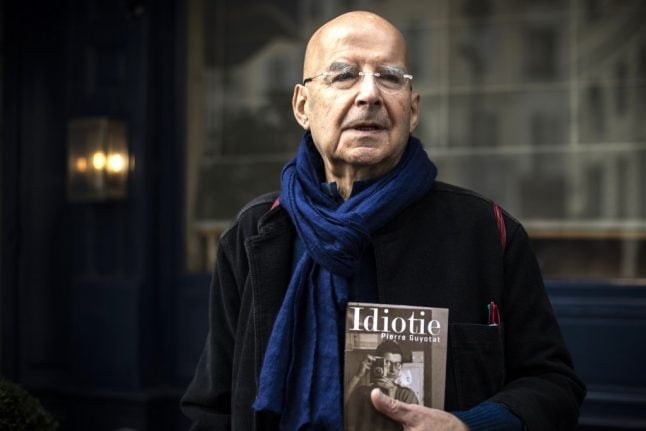 Guyotat poses with his book 'Idiotie' after being awarded the Prix Medicis in 2018.

Long plagued by scandal, Guyotat was finally awarded France's Medicis literature prize — which “Eden, Eden, Eden” missed out on by one vote in 1970, in 2018 for his book “Idiotie” (“Idiocy”). He is probably best known for his 1967 book “Tombeau pour cinq cent mille soldats” (Tomb for 500,000 Soldiers), inspired by the time he spent as a soldier in the Algerian war.

Born in Lyon in eastern France in 1940, Guyotat left for Paris at the age of 18 to become a poet.

His father, a doctor, hired a private detective to find and bring him back, but Guyotat won out, sleeping for some time under Paris' Pont de l'Alma bridge over the Seine.

After finishing his first book in 1961, Guyotat was called up to serve in the army, only to be found guilty of “damaging the morale” of the institution months later.

Back in Paris, he became a journalist and started publishing books frequently.

He was among a group of writers and intellectuals who signed a petition, drawn up by essayist Gabriel Matzneff, in 1977, asking for a relaxation of laws concerning relationships between adults and minors.

Matzneff, who has admitted travelling to Asia to have sex with children, is being investigated by French police after a leading French publishing executive detailed how he abused her when she was 14 in an explosive new bestseller.