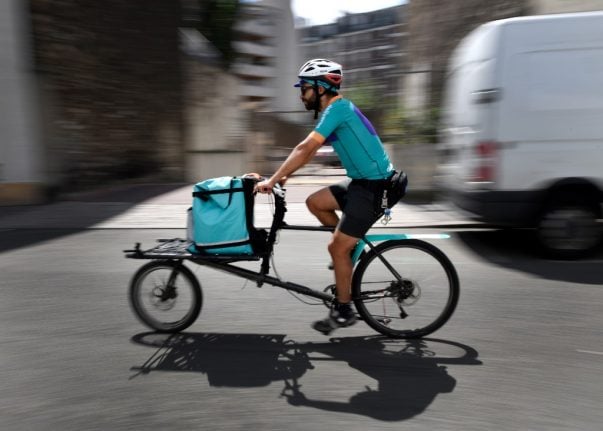 The case is the latest is a series challenging the 'gig economy'. Illustration photo: AFP

A Paris labour court judge said that paying the employee as an independent contractor and not a regular employee “was an attempt to skirt labour laws”, his lawyer Kevin Mention told AFP after the ruling was announced late Thursday.

After joining the platform in 2015, the delivery man asked for a full-time contract the following year, which was refused.

The court ordered Deliveroo to pay the cyclist €30,000 in damages.

“It's the first time Deliveroo has had to requalify a contract in France,” a spokesman for the service said, adding that “we are going to study the decision and potentially file an appeal”.

“Our delivery people tell us that they want to choose when, where and if they want to work, and that's what we let them do,” he added.

But he acknowledged that in this case, the cyclist was still being paid by the hour, whereas Deliveroo now pays per delivery, adjusted for time and distance.

Deliveroo is also facing claims in Belgium that it should be paying payroll taxes for thousands of people delivering meals, while Spanish authorities said it avoided €1.2 million in social charges by refusing to consider workers employees.

Mention said he planned to launch “around 50 other labour cases against Deliveroo”, and others against rival delivery groups Frichti and Stuart.

Created in 2013, Deliveroo has grown to delivering meals to clients in more than 200 cities across 12 countries.

The ruling comes as Deliveroo is under investigation by Britain's competition regulator over plans to sell a stake to US online giant Amazon.