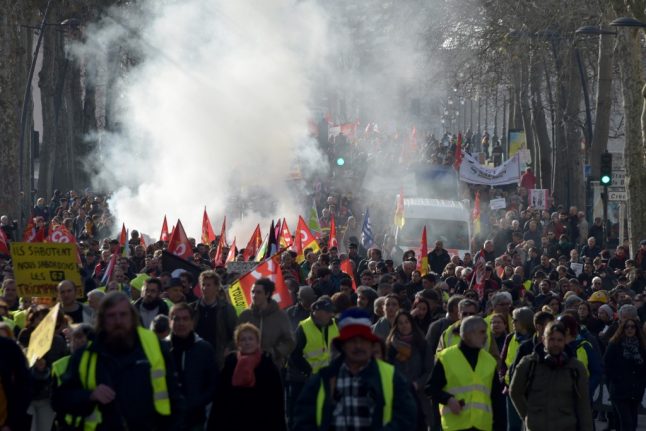 French unions have called for another national day of protest against the government’s pension reform plan on Thursday – the day the plans come before the French parliament.

Transport is running almost as normal across the country – even in Paris, which was the area hardest hit by the unions' action in December.

A protest march is planned for Paris in the afternoon, and some Metro stations along the route of the march will close by order of the police.

The march is set to depart at the Gare de l’Est station at 1.30 pm and move west to end at Nation. The number of people taking to the streets on protest days has been dwindling since the beginning of the movement.

France's pension system: How it works and what does Macron want to change?

On January 29th, 108,000 people took to the streets nationally, according to the French Interior Ministry. In comparison, the number was 615,000 on December 17th.

The CGT union's estimates were higher, it said 180,000 people turned up in Paris alone on January 29th and 1.8 million nationally on December 17th.

There are several reasons for the decline in people taking to the streets. Firstly, the financial strain on the workers taking part in the movement has been palpable.

Secondly, some of the unions have dropped out of the movement.

Four of the big worker’s unions – CGT, Force ouvrière, FSU, Solidaires and – were still taking part in the protests, but the more moderate CFDT and Unsa unions ceased their mobilisation against the reform in January.

This came following the government’s tentative backpedaling on one of the main points in the reform, the so-called ‘pivot age’ that would respectively penalise or reward those retiring before and after the age of 64.

Discussions are ongoing between the government and the unions are ongoing on the issue of a pension 'pivot age' that will give fuller pensions to those who work later than the legal retirement age of 62.

Transport has been running largely as normal for several weeks now, but workers in Paris waste depots have been staging blockades that have seen uncollected garbage piling up on the streets in some areas of the city.